Let's just say it: the governors of several southern states have decided to follow a "herd immunity" approach in dealing with COVID-19. They limit interventions to the absolute minimum level required to avoid dramatic hospital overloading. This is certainly the case in Texas and Florida. 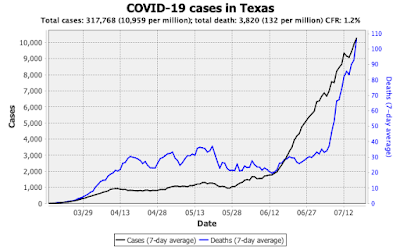 On a purely selfish basis, I can see positives in the approach Texas is taking. If they succeed in reaching herd immunity quickly, then we can go back to Texas next winter, without having to worry much about COVID-19. But can Texas get there - or rather, how long will it take to reach herd immunity? This post tries to answer this question - but let's start with a quick recap about what "herd immunity" is.

What is "herd immunity"?

When a new virus like the SARS-CoV-2 virus that causes COVID-19 emerges, it keeps infecting more an more people until one of several things happens:
Vaccines can be seen as a combination of the three steps above: the vaccine is a drug (#2) that people need to take (#1), and it builds immunity to prevent infection (#3). But a COVID-19 vaccine will not be available anytime soon, so we'll ignore this for the time being.
At the point were enough people have been infected (or vaccinated) so that an epidemic dies out, the population has reached "herd immunity". Depending on how infectious a virus is, reaching herd immunity requires that anywhere between 50% to more than 90% of the population has been infected (or successfully vaccinated).
For COVID-19, it is generally assumed that herd immunity would be reached after somewhere between 60% and 70% of a population becomes immune due to prior infection or successful vaccination. Here is a simple way of explaining this number: we know that on average, each person infected with the corona virus will infect three others. But if two of these three others are immune to the virus, then only one person will be newly infected - the epidemic stabilizes. If the "immunity rate" is a bit higher than 2 out of 3, then each person will infect less than one new person, and the number of new infections will start to decrease.

To see how Texas might reach herd immunity, we need to look at some numbers:
If 2 out of 3 Texans need to have been infected for herd immunity, that comes to 20 million Texans. With 307, 572 Texans already infected, that leaves about 19.6 million infections that have yet to happen. At the current rate of about 10,000 new cases per day, a very naive estimate would be that reaching herd immunity will take another 1,963 days - more than 5 years.

What about untested infections?

I called the first estimate above "very naive" because it assumes that every single infected person in Texas has been tested for COVID-19. We know with absolute certainty that this is not the case - some people do not have any symptoms, and others do not get tested for a variety of different reasons. For New York, antibody studies have shown that only about 1 out of 10 infected people were tested - so let's plug in these numbers to see what happens.
With a "test rate" of just 10%, the number of actual cases would be 3.07 million, and the number of people who get infected every day would be about 100,000. This means that herd immunity levels would be reached in 169 days - just about when we like to become winter birds in Texas!
Unfortunately, that's not good enough: after 169 days, we'd still have about 10,000 new confirmed infections per day in Texas, and this number would just start to slowly drop lower. And since we assumed that only 1 in 10 infections is tested, the actual number of daily infections would still be about 100,000. Another way of looking at the same numbers is that about 1 in 300 persons gets newly infected every day. With 2 people staying for a couple of months, the infection risk would be about 40% - too much for my taste. Bummer.

The two scenarios above describe two extreme situations: what would happen if tests cover every infected person, and what would cover if only every tenth infected person gets tested. In all likelihood, the truth lies somewhere in between. There are a few things we can look at to get clues. One is the "test positive" rate - how many COVID-19 tests come back positive. In New York City during the height of the epidemic, the test positive rate was between 50% and 70%: tests were so scarce that (almost) only people got tested where it was extremely likely that they were infected - usually people with symptoms severe enough to require hospital admission.
In contrast, the overall test positive rate for Texas is about 10.6%, much lower than in NYC. This indicates that tests have been more widely available, and that a larger fraction of infections has been captured by testing. The test positivity rate has recently increased in Texas, but always stayed below 20%.
Another way to estimate the under-reporting factor is by looking at fatality rates. In New York during the height of the epidemic, the case fatality rate (CFR) exceeded 10%; for Texas, the raw CFR is around 1.3%. Even after doing the necessary adjustment for the delay between testing and death, the "time-adjusted" CFR for Texas is about 2% to 3%.
We can use the time-adjusted CFR together with the "infection fatality ratio" (IFR) to estimate the ratio of infections to reported cases.  As the upper limit for the IFR, we can use 1.45%, which is the ratio observed in New York City. Given that Texas has a younger population and that hospitals are not as overloaded as they were in NYC, this is a true upper limit, and probably too high. As a lower limit, I'll use 0.4%, which is most likely too low.
This gives us a "hidden case factor" or "under reporting factor" range of between 1.5 and 6 for Texas; I'll use 2 and 5, which pretty much outline the reasonable range.
If we assume an under reporting factor of 5, about 1.5 million Texans have been infected with COVID-19 already, and about 50,000 new infections happen every day. At this rate, reaching herd immunity will take 368 days - one year.
If we assume an under reporting factor of 2, reaching herd immunity would take 966 days - about two and a half years.
Similarly, we can use the known COVID-19 fatality rate in Texas to extrapolate how many additional COVID-19 deaths would occur in Texas until herd immunity is reached. For an under reporting factor of 5, the total number of deaths at herd immunity levels of infection would be 73,539; for an under-reporting factor of 2, it is 186,998.  In both cases, the number of expected COVID-19 death per day would be about 200.

A Texas-sized sacrifice of human lifes

Texas is a big state. It's a very populous state, with almost 30 million people living there. The approach to COVID-19 has placed heavy emphasis on the economy.
If Texas keeps following the current approach, while keeping the number of new daily confirmed COVID-19 cases stable at about 10,000 per day, Texas will reach herd immunity somewhere within the next two and a half years, and possible within one year. During this time, about 200 Texans will die each day from COVID-19 (although excess mortality data indicate that the actual death toll will likely be significantly higher). During the entire time, many hospitals will be operating at or beyond ICU capacity, which could further increase the death toll.
Perhaps the most positive scenario for Texas includes a rapid development of an effective COVID-19 vaccine, and wide-spread use of this vaccine in Texas. In the most optimistic scenarios, a vaccine might become available in adequate quantities at the beginning of next year. Until then, about 40,000 Texans will have died from COVID-19 - unless the governor of Texas finally decides to (re-)impose stricter and more effective measures to reduce corona virus transmissions.
at July 18, 2020