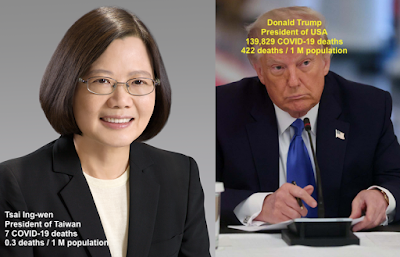 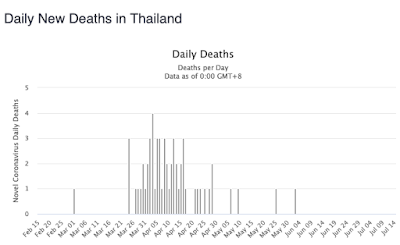 Thailand does show a cluster of 1-4 daily deaths from the end of March to the middle of April. 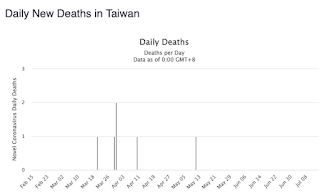 Taiwan had even fewer death, with one day of two deaths.
Including Taiwan, but excluding Thailand, Sri Lanka, and Singapore would seem like an arbitrary decision, if not for the effect on the results: the exclusions make the "female lead" results look better. This very much looks like intentional data massaging. That's not science, that's politics.
The intentional bias becomes even more obvious when we look at sentences like this one from the preprint:
"Female-led countries reported 1,983 (± 2,724; 95% CI) deaths, while men-led countries 13,276 (± 9,848; 95% CI), by considering average values"
The primary reason for the difference? The "men-led" countries have larger populations! When taking the differences in population size into account, the differences mostly disappear. The authors write:
"When we normalize the data per population, we find that countries led by women had 1.6-times fewer deaths per capita than their male-dominated counterparts"
That's only a factor of 1.6. But to get this low factor, the authors had to manipulate the countries in the lists, as explained above! If we correctly place Greece and Estonia in the "men-led" categories, and add countries that have done extremely well in fighting COVID-19, but were excluded by the authors, the differences become a lot smaller: a factor of 1.27. This drops to 1.23 if we omit the US because there never was a nation-wide lockdown.
For illustration, let's look at a graph that shows the death rates: 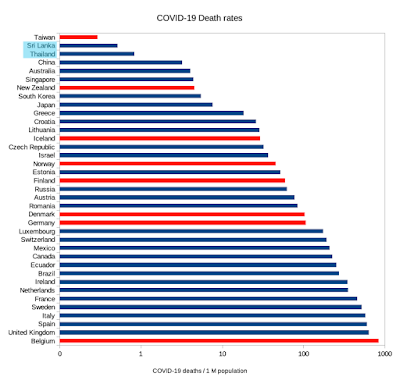 Countries led by women are shown as red bars. Note that the x-axis is logarithmic, which is better suited for the huge observed differences in death rates. Sri Lanka and Thailand, the countries the authors chose to omit, are high-lighted.
The differences between countries in the "women-led" category are more then 2,800-fold; in the "men-led" category, the differences are more than 1,200 fold.  The differences between the sexes, on average? Just 1.2-fold. Perhaps the sex of the leader does play a role - but if so, that's a thousand-fold less important than other differences in how countries responded to COVID-19.
It appears that the authors of the preprint distort and misrepresent data to fit their pre-conceived conclusion that "female leaders are better". This behavior is at least close to scientific misconduct. It may give the authors a few moments of fame when this is picked up by media, but the long-term effect on science can only be detrimental. A lot can be learned from countries that have kept COVID-19 transmissions low, like Taiwan, Sri Lanka, and New Zealand. Focusing on the sex of the country's leader only distracts from learning what really works - like face masks, which were very much at the center of Taiwan's efforts to minimize COVID-19 deaths.
at July 15, 2020