COVID-19 Transmission: Why Social Distancing Is Not Enough

This post looks at what science can tell us about how important difference transmission modes are in the COVID-19 epidemic. Multiple facts indicate that transmission through droplet deposition on surfaces and touch ("fomite transmission") plays an important role in the epidemic. Any measures to stop the epidemic must take this into account. Measures mostly aimed at "social distancing" are of very limited use to contain touch-based transmission when exceptions for shopping and work are considered. They must be supported by additional measures that specifically target long-distance transmission modes; countries like Taiwan and Singapore who have had success in containing the epidemic provide examples of such measures.

For predictions of effective interventions will be in containing the epidemic, computer models need to take the different transmission modes into account. Current models generally assume only short-distance transmission modes, although this is rarely made clear. Such models tend to overestimate the effect of interventions.

To stop the COVID-19 epidemic, it is essential to understand how the virus spreads. This post examines some of the relevant science that can provide insight how the corona virus spreads. We will then use these insights to look into measures intended to stop the spread of the virus.

Often, the public intervention measures are chosen based on the predictions of computer models. I will explain how misconceptions and lack of knowledge can affect the outcome of model predictions.

In many western countries, intervention measures relied heavily on "social distancing". The underlying assumption is that by staying away from others who may be infected, the number of transmissions can be reduced. For this post, I will include all measures that aim to reduce social contacts in this category, including "stay at home" recommendations, restrictions on public gatherings, school closures, and closures of restaurants, bars, hotels, and shops.

The typical social distancing measures often have exceptions that affect large parts of the population or even the entire population. Two common examples are exceptions to go shopping, and allowing those who cannot work at home to keep going to work.

The following picture gives an overview of how viruses can infect people (from this article; we are ignoring transmissions through food and water, which appear irrelevant for COVID-19):

To get infected, virus particles must get transferred to a mucous membrane of another person: the mouth, nose, or eyes. This can happen several ways:
These four transmission modes can be divided into two separate categories:
Both close-contact and long-range transmissions have been shown to be important in viral epidemics, but there are substantial differences between viruses. For the SARS-CoV-2, the virus that causes COVID-19, little is known about the relative importance of close-contact versus long-range transmissions. However, we can learn important lessons by looking at what is know about other viruses, and facts that we do know about SARS-CoV-2 and COVID-19.

It is very easy to understand that you could get infected by someone sneezing or coughing on you, so this is something we may think of first when considering how we could catch a COVID-19 infections. But while this is indeed a possible transmission mode, a recent study has shown that it is only of minor importance - mostly because the "target" areas are quite small, as this illustration shows: 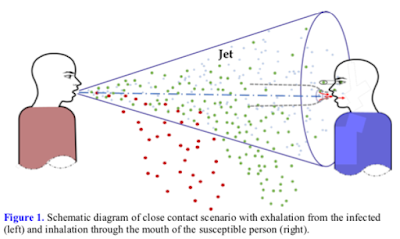 A detailed examination of what happens to droplets in a "sneeze cloud" has shown that small droplets can be suspended for extended times, partly due to quick evaporation, and that parts of these "multiphase clouds" can travel larger distances, thereby facilitating long-range transmissions.

Coughs and sneezes do not matter that much

Studies have shown that concentration of droplet in regular breath is comparable to the concentration of droplets in coughs and sneezes; when exhaling deeply, regular breath can even contain more droplets than coughs and sneezes. Influenza virus particles have been successfully recovered from breath even in the absence of coughs.


SARS-CoV-2 is well suited for touch and aerosol transmission

The virus that causes COVID-19 has several characteristics that are favorable for fomite and aerosol transmissions. The virus is stable  in aerosol droplets for at least three hours, and longer on surfaces. In contrast to rhinovirus, the SARS-CoV-2 virus replicates in lungs, where aerosol droplets are formed. Furthermore, virus shedding starts early, before the onset of symptoms, when infected persons are likely to still be socially active.


SARS-CoV-2 can be detected in aerosols and on surfaces

Several studies have shown that the corona virus can be detected in the air and on surfaces in hospital rooms of COVID-19 patients, even when the rooms are completely disinfected twice daily.
Another study found between 1 and 42 virus particles per cubic meter of air in various hospital settings; this corresponds to the typical two hour breath volume. In settings where mask supply is limited so that patients cannot use masks, is is possible that the virus concentration in the air would be higher.


SARS-CoV-2 is different from other viruses

Some doctors and virologists have made public statements that the corona virus "does not spread by touching surfaces" in interviews. However, these statements are likely to be incorrect, and probably based on experience with influenza and common cold viruses, where short-distance transmissions are the primary transmission modes. In contrast, there is an overwhelming abundance of circumstantial evidence that long-range transmission may play an important role in the COVID-19 epidemic.


Effectiveness of "Stop the Spread" measures

To judge the potential effectiveness of public interventions to stop the COVID-19 epidemic, it is imperative to evaluate how a measure impacts spread by the different transmission modes. As the name implies, "social distancing" measures make the implicit assumption that short-range transmissions are very important; if this is correct, transmissions can be stopped by increasing distances between people. A very typical example is the mandatory 6-foot distance in checkout lines in stores in Massachusetts.

But while such measure can indeed reduce transmissions, they cannot completely stop transmissions if long-distance transmissions also play a role. This is important in the common exceptions to "social distancing regimes", in particular the work environment and grocery shopping.

Let us have a look at grocery shopping to illustrate. Many inhabitants in affected areas still go grocery shopping on a regular basis, albeit perhaps less frequently. A certain subset of this group will be infected without knowing about it, for example because they are in the pre-symptomatic period, or because their symptoms are mild or atypical. It is now known that they nevertheless can be infectious, and spread the virus by coughing, sneezing, and (as explained above) just breathing. Over the course of a day, this will lead to fomite deposits throughout the grocery store: little invisible droplets of "living" virus that is just waiting to be touched and transferred to the fingers of another shopper. In a reasonably busy store, it is just a question of time until a shopper gets virus on his fingers.

Once the fingers contain virus, it is a race between three possible events:
Stability studies for SARS-CoV-2 indicate that the last event is least likely in the time frame of our scenario. In general, washing or disinfecting the hands will have to wait until after checkout or even until arriving back home. Typically, people touch their mucous membranes about 10 times per hour, or every six minutes. This is a mostly unconscious habit that is very hard to break, especially for extended times and when distracted. Therefore, the chances that a shopper transfers virus from his fingers to his mucous membranes during a shopping trips is rather large: shopping trips become a transmission route for the epidemic. Once home from a shopping trip, the shopper can then infect other household members, even if they never leave the house. But before getting home, the shopper will likely have to touch a touch screen on a credit card terminal that most other shoppers before him also have touched - another prime opportunity to "collect" virus particles.

This illustrates how shopping can "feed" the growth of the COVID-19 epidemic through long-distance transmission, even if people who strictly adhere to social distancing measures. Similarly, additional transmissions are likely to happen at work places; especially in large shared office spaces, where many people breathe the same air for hours each day, aerosol transmission could play a major role.

Before we go on to the next section, let us have a quick look at a few measures in other countries that were specifically aimed at reducing touch transmission: 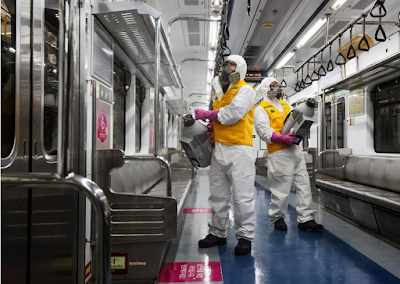 Where computer models need to improve

Many computer models used to predict the future development of the COVID-19 epidemic do an excellent job at predicting what will happen if nothing is done - the "no intervention" scenario. By comparing expected case numbers to the (smaller) number of available hospital and ICU beds, such models have prompted several countries, including the UK and the Netherlands, to take actions to contain the epidemic.

However, when trying to compute the potential impact of interventions, the computer models completely ignore transmission modes. The models often make no difference between "contact" and "transmission", other than assuming a constant factor for transmission effectiveness and time delays.

Typically, this means that models equate a reduction in social contacts with a similar reduction in transmissions, or the "effective reproduction rate" R. To contain an epidemic, R must be reduced from a values above 1 to a value below 1. The typical values used for R in the models are around 2.5 or 3. Due to the incorrect equating of contacts and transmissions, it appears that a 3 or 4-fold drop in contacts is sufficient to contain the epidemic. Therefore, many groups have "concluded" that even a 75% participation in social distancing is sufficient to contain the COVID-19 epidemic.

It is quite possible that this error is the basis for the hesitant and iterative approach to implementing containment measures in multiple countries.

Going forward, it is important to develop computer models that reflect reality more accurately by taking different transmission modes into account, and evaluate the potential effect of different measures for each of these transmission modes. Conceptually, this is reasonably easy to implement; the major limitation is that we do not have sufficient data to correctly estimate the effect of interventions. Ideally, such models should also take the different behavior of subgroups into account, which makes the implementation a bit harder. Nevertheless, such refined models will show one thing clearly: