Effects and Limitations of Social Distancing in Canada

Short version:
New influenza cases in Canada have dropped much more in previous years, but new COVID-19 infections keep going up. This can not be explained only by longer incubation time for COVID-19. Additional measures that take aerosol and fomite transmissions when shopping and working are needed.

Long version:
A graph about drastic reduction of influenza cases in Canada after social distancing was implemented caught my eyes this morning: 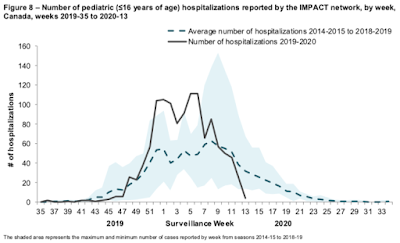 It shows a dramatic drop in hospitalizations for influenza after social distancing measures were implemented. For influenza, we know from past seasons what kind of drop would be normal right now, and this year's drop is much steeper. So social distancing works! But let us have a closer look. 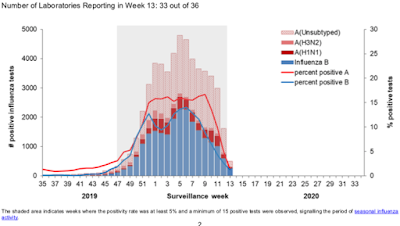 We can see a similar drop, although it is a bit less dramatic. Still, it definitely looks like social distance has an effect! So how about the COVID-19 numbers? Let's have a look: 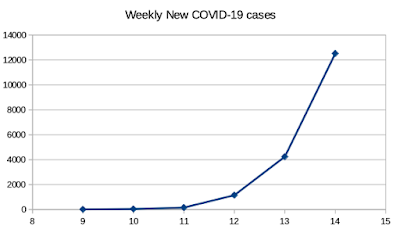 That does not look good - the numbers keep going up! Maybe this is due to the longer incubation time for COVID-19? Unfortunately, that is not the case. True enough, COVID-17 does have a longer incubation time than influenza - about 5 to 6 days on average, compared to about 2 days for the flu. So that's maybe 4 days extra. Even if a add another delay of 3 days for possible slower testing, the new COVID-19 cases should go down with one week delay relative to the flu cases. But they did not - they kept going up instead. Note that we have a week more data for COVID-19 than for the flu! Actually, it's just 6 days, but we still have more a lot more new COVID-19 cases in the first 6 days of week 14 than in all of week 17.

So, does that mean that the social distancing does not work? Not quite! We need to have a closer look at what exactly happened, and how that influenced the flu and COVID-19 epidemics.

For influenza, it is well known that children are a factor that is driving the epidemic. When kids have a school break during the spring, new cases of the flu drop quickly - that has been seen all over the world, from Singapore to Canada. The winter school break in Canada was in week 12 (March 16-20), and that's were we see the drop in hospitalizations of children. Schools remained closed after that to combat the COVID-19 epidemic. With schools closed, kids have much less contact to other kids, and new flu cases drop - even for adults, who often catch the flue from their children.

But for the COVID-19 epidemic, there is no indication that children are a driving force of transmissions. Children can get infected, and can infect others, but how important this is for the general epidemic remains unclear. Many other countries have closed schools as part of their COVID-19 measures, but there is no evidence that school closures alone have an impact on how fast COVID-19 infections spread.

Back to the question if "social distancing" works. Like most other countries, Canada has introduced measures to reduce close contacts between adults by prohibiting large meetings and told people to stay home; if they have to go out for reasons like work, shopping, or exercise, everyone should stay away at least 6 feet from others. The hope is that such distancing eliminates "contact" and thereby transmissions. Most of the measures were introduced around March 18.

To see if the measures had any effect, we should also look a the daily new case numbers. These are a bit more problematic due to day-to-day variations, but if we keep that in mind, we may still learn something. Here is the graph for Canada: 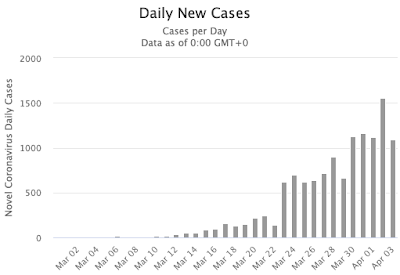 There are three days where the numbers seem to drop: March 22, March 29, and April 3. However, the drop is just one day, and the first two days are Sundays, to these drops may not be real; for April 3, not all labs may have reported cases yet. So all we can say is that maybe we see an effect of measures.
For comparison, let's look at another country with similar measures: 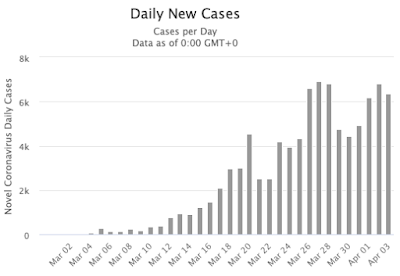 We see a similar "weekend effect" on March 21 and 22, but the numbers for the next 3 days remain below the March 20 numbers. A similar pattern repeats the next weekend, albeit at a higher level. Germany seems to have contained the epidemic sufficiently to go from exponential growth to linear growth. The oscillations we see may well be due to the transmission dynamics rather than weekends - computer models often see similar effects.

If we now compare Germany's daily numbers to Canada's numbers, we can see some similarities. There are a couple of phases where the numbers stabilized for 3-day period before increasing again. One complication for interpreting Canada's numbers is the large numbers of "snowbirds" that returned from the US to Canada at the end of March. Many of them came from heavily infected areas like Florida, or from ski areas. Infection spread in and from ski areas has played a big role in the initial spread in Italy and other European countries. If the return of infected Canadians indeed is a cause of the delayed response, the new infection numbers should stabilize or go down soon.

Even if the current measures turn out to be adequate to stabilize the number of new infections at the current level, the effect is significantly lower than the observed effect for influenza. For Germany, stabilizing daily infections would mean about 150 new deaths from COVID-19 each day, or more than 50,000 deaths per year. Canada may experience a similar number due to the lag between confirmation and eventual death. In the US, where the number of new cases per day is still growing rapidly, a "stabilization" effort now would still result in a level of at least 2,000 death per day - hundreds of thousands per year.

Unless countries are willing to accept such high death rates from COVID-19, more effective are needed. Current measures appear to lower the epidemiological reproduction rate of the disease to somewhere close to 1.0 in the best case; a reduction to significantly less than 1.0 is needed.

Casual and survey evidence indicates that the reduction of "contacts" under current measures is above 70-80%. If such contact reduction would directly translate to a similar drop in transmissions, as many authors of computer modelling studies assume, then the number of new cases should show a very defined drop followed by a continuous downward trend - something we see for influenza, but not for COVID-19. Therefore, the strictness and effectiveness of COVID-19 measures must be increased. Among other things, this requires consideration of transmission modes like fomite and aerosol transmissions which are not affected by "distance" rules.