How much testing do we need to "re-open" the economy? Let's look at a comparison between countries to get an idea. But how do we take into account that countries are very different in size, and have very different numbers of COVID-19 cases? One way would be to simply divide tests by the number of confirmed cases. But there's a problem with this approach: some countries are known to not test everyone with COVID-19 symptoms, so their official "confirmed case" numbers understate the magnitude of the epidemic - sometimes by very large factors.

A better number to use for normalization is the number of COVID-19 deaths. There are also some differences between countries about what they count as a COVID-19 death, but they are not nearly as large as the differences in who gets tests. So here's a look at some countries: 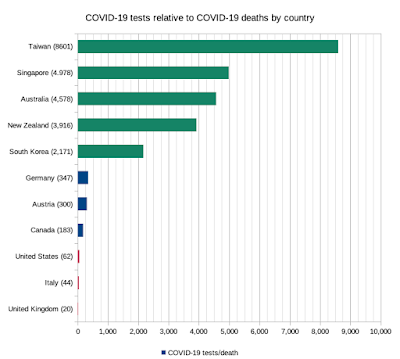 The green bars at the top are for countries that have managed to keep COVID-19 under control, with Taiwan leading the pack. Each of these countries has done more than 2,000 tests per COVID-19 death (for the numbers shown, I used the reported test numbers from 10 days earlier, since there is a delay of about 10 days between test results and death).

The middle group with blue bars has done a few hundred tests per COVID-19 deaths. All three countries show a clear downward trend in new cases (more about that below).

The last group has states with fewer than 100 tests per COVID-19 death, and includes the US, Italy, and the United Kingdom. This group also has the highest number of COVID-19 deaths, relative to population size.

Overall, the relative number of tests is strongly correlated with how well a country managed to control the COVID-19 epidemic - but why? Simply put, more testing allows countries to find a higher percentage of those infected with the virus, so that they can be isolated, which prevents further transmissions. More testing generally goes hand-in-hand with earlier testing: if plenty of test capacity is available, everyone can get tested right away. For the countries in the green group, this includes not only anyone with symptoms, but also anyone who has been in contact with a confirmed case. These countries all have large and efficient "tracking" efforts to find such contacts, and test them before they can infect anyone else. This is very important for COVID-19, since many transmissions happen before the first symptoms appear, or are from persons who never develop significant symptoms - but can still infect.

The goal for test and track is clear: test every person who is infected as soon as possible, and if a test is positive, test every person that has been in close contact with him or her. How does that relate to deaths? Various studies have shown that about 0.5% to 1% of all people infected with the SARS-CoV-2 virus die. Therefore, we absolutely need to test about 100 to 200 people for every reported death. To also test everyone who has been in close contact with an infected person, we need to test maybe another 5-10 people per infected person. That brings us to about 500 to 2000 tests per COVID-19 death.

We know that the tests can sometimes be negative when they are done to soon after infection, so ideally, everyone who tests negative should be tested again a couple of days later. Similarly, anyone who tested positive should be tested at least a couple of times with negative results before he can be released from quarantine. This adds another factor of at least two, so now we are at a absolute minimum of 1,000 tests per death that need to be done, with a range up to 8,000 tests per deaths. That's exactly what we are seeing for Taiwan, Australia, Singapore, New Zealand, and South Korea. 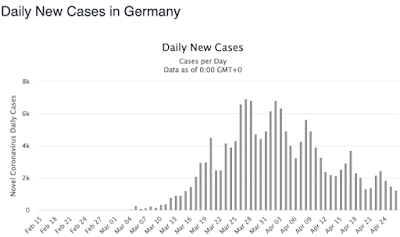 There's definitely a downward trend, but the day-to-day variations make it difficult to quantify. So we need to smooth the data first, for example by using 7-day averages. We expect new cases to be proportional to current cases, which means we would have an exponential function; so we can take a log of the smoothed numbers, and try to fit a straight line through them - say, for sliding one or two 2-week periods. The slope of the line then corresponds to the growth rate of the epidemic - it tells us how fast the case numbers are going up or down. Here's a look at this curve for Germany: 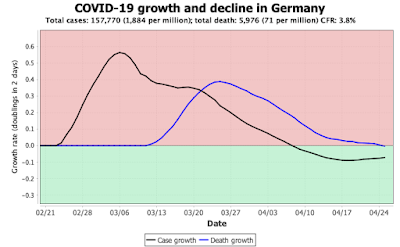 The black line shows the growth rate for cases, the blue line for deaths. Due to averaging and using 14-day ranges to calculate the growth, the curve are a bit delayed to the raw data. But we can see that the growth of the epidemic in Germany was fastest before the end of March, and that the case numbers have been decreasing for a few weeks now: the black curve is in the green zone that indicates a negative growth rate. The decrease is significantly slower than the initial increase, though.
Here's the graph for Australia: 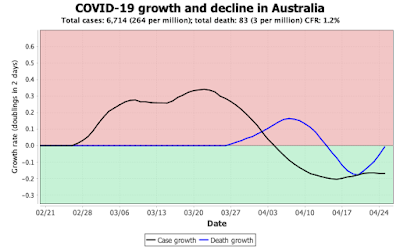 Australia has done better than Germany. It managed to keep the epidemic on a much smaller scale (relative to population), and the decline in cases was almost as fast as the incline.  Now let's look at the US: 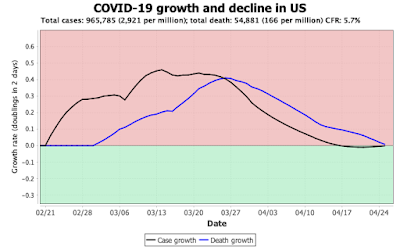 The US barely managed to stop the growth of the epidemic; daily case numbers are roughly stable, when compared over a 15-day window. However, things differ a lot by state. Here's New York: 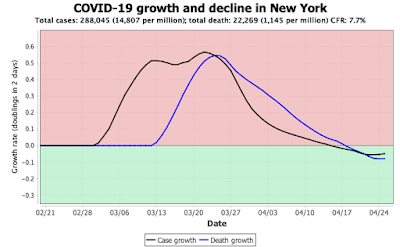 The strict stay-at-home orders in New York have managed to control the epidemic, and case numbers as well as daily deaths are shrinking. However, raw CFR (deaths divided by cases) of 7.7% is much higher than Australia's 1.2%, indicating that just a small subset of infections was tested.

Now let's look at a couple of states that have announced that they want to "re-open" the economy by gradually relaxing stay-at-home orders. 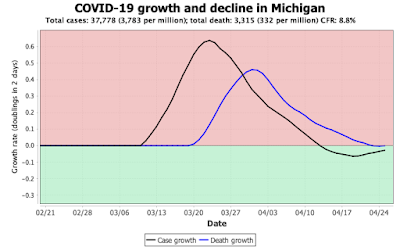 Michigan managed to have a negative growth rate, but the CFR is even higher than for New York, meaning that way too little testing has been done in Michigan. The official case rate is almost 4 per 1000 inhabitants, but the actual rate is likely to be at least tenfold higher. 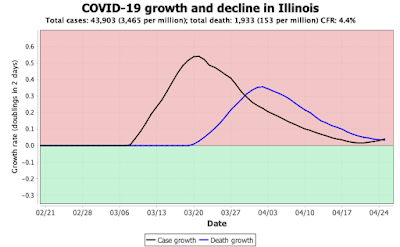 Illinois is also eager to re-open the economy. However, both death and case growth rates have remained positive, meaning that the number of cases per day is still growing, even before restrictions are relaxed. 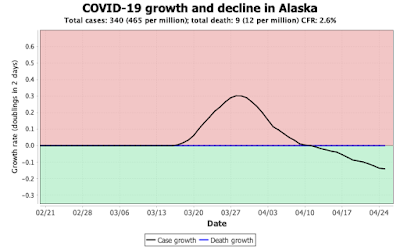 Alaska has a case rate that is about 8-fold lower than the rate for IL and MI, and a low CFR rate that indicates more testing. The case growth shows an accelerating downward trend. Of all states looked at so far, Alaska is in best shape for re-opening, although more testing will be needed to make test and track effective. 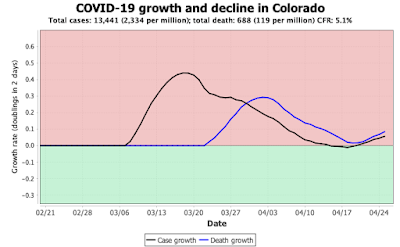 Colorado shows an upward trend in both case growth and death growth, and a high CFR above 5% that indicates insufficient testing. 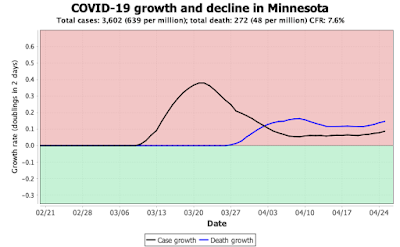 Minnesota appears to have a relatively low case rate, but the high CFR of 7.6% indicates that this is most likely due to insufficient testing. Both cases and deaths have shown a positive growth rate the entire time - things are continuously getting worse in Minnesota. Like most of the other states shown above, Minnesota is in absolutely no shape to re-open the economy; quite the opposite - business restrictions and social distancing requirements need to be stricter than so far so that the growth in new transmissions can be stopped.

In conclusion, the observed trends in new case growth show that a containment of the COVID-19 epidemic has not been achieved at anywhere close to sufficient levels in most of the states that plan to re-open the economy soon. Relaxing social distancing restrictions will cause COVID-19 infections to accelerate in these states. However, the increases will only be picked up with a substantial delay; it will probably at least 10 days to 2 weeks before even a slight increase becomes noticeable above the day-to-day variations. It is very likely that the number of COVID-19 infections in each of these states will rise to a multiple of the current number before the governors in the affected states will even start to consider re-enacting restrictions that have been removed to early.
at April 27, 2020