The Cost of Making COVID-19 Disappear

President Trump keeps stating that COVID-19 "will just disappear", "just go away", that "it will be gone". I understand that many scientists and democrats are skeptical about these statements - but how about we instead explore where they may be coming from? In this post, I will look at one of two possible explanations: an exceptional willingness to sacrifice.

Let's start with a look at the current situation - how many new COVID-19 cases per day we see in the US: 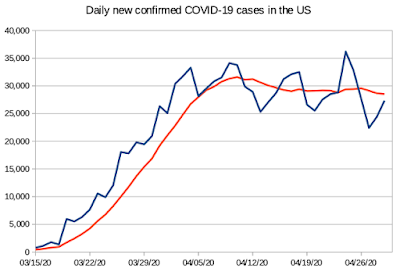 The data are a bit up and down, but if we look at the red line which shows 7-day averages, we can see a small downward trend in the last 2-3 weeks. What would happen if this trend continues? You could have a look at my "Data Trend Model", but for this post, I'll go back to my older epidemiological model instead. The trend in the last 2 weeks correspond to a reproduction number just below now; with the parameters used in the model, it comes out to an R(0) of about 0.98. Here's what the daily cases would look like for the end of the year: 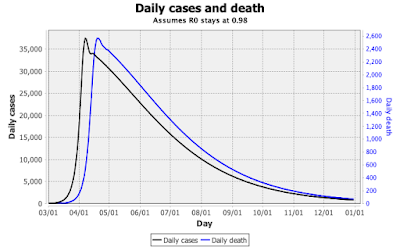 There would be a steady but slow decline, and the numbers would not quite be at zero by the end of the year. Here is what the cumulative numbers would look like: 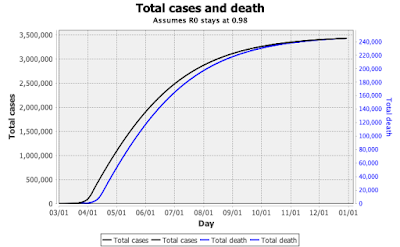 By the end of the year, we'd have about 245,000 COVID-19 deaths in the US. But getting there would require to keep the current "stay at home" measures and business closures in place the entire time, which is clearly not going to happen.

Instead, we are starting to see beaches and business re-openings in multiple states. Without any doubt, this will increase COVID-19 transmissions. However, since many people will practice "social distancing", wear face masks, and so on, the epidemic will grow slower than in the initial phase, where the reproduction number R was about 4.0. So let's look at what happens if we get a transmission increase that corresponds to an R(0) of 1.2: 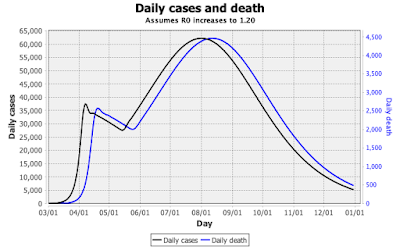 The number of daily cases will grow until it reaches about 60,000 cases per day, roughly twice what we have right now. The number of daily death will also be about twice of what it currently is. One interesting feature of the prediction is that numbers start to go down again in August, even without any new restrictions. To understand this, let's have a look at the totals: 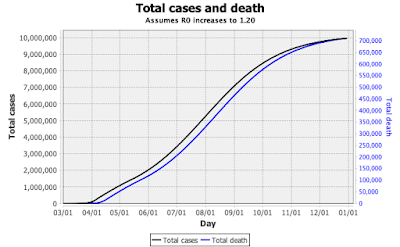 In August, we reach about 6 million confirmed cases. The model assumes that only one out of ten infections is actually tested and reported as positive, which is in line with estimates that used various different techniques. So the total number of infections in August is about 60 million. That's close to 20% of the US population. We also assume that most people who have been infected cannot get infected again; that may not be proven yet, but it is very likely, at least over the time that we are looking at. Now an R of 1.2 means that every person will infect on average 1.2 other people. To avoid "partial people", let's look at 100 infected persons - they would infect 120 others. But if 20% of them have been infected before, only 80% of the 120 would "catch" the infection: just 96 people. That means the number of infected people will slowly go down.

There is absolutely no doubt that "re-opening the economy" will cause an increase in COVID-19 cases, but we do not know by how much. It is quite possible that the reproduction factor will go up to 1.4 instead of 1.2; that's still a lot less than a couple of months ago. So let's look at how many cases and deaths we would see: 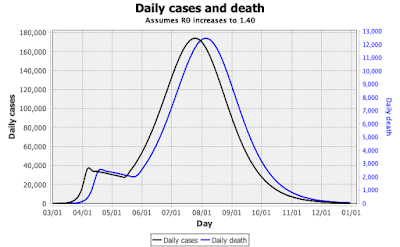 With the faster growth, we'll reach the peak in new daily cases at the end of July. Both daily new cases and daily deaths would be about six times higher that what we currently see. But at the end of the year, the number of daily COVID-19 cases would be very close to zero. Here are the total numbers for this scenario: 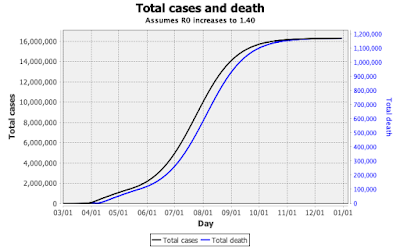 The total number of "confirmed cases" would be above 16 million; since we assume a 10:1 ratio of infections to positive tests, that means about half of the US population would have caught the corona virus. The model assumes that 0.6% of all infected persons die from COVID-19, which gives about 1.17 million deaths. Compared to the original scenario, that is more than 900,000 additional COVID-19 deaths.  But since the model does not take increased death rates from overcrowded hospitals into account, this number is likely to be too low, and the actual number of additional deaths is likely to exceed one million.

For many, the thought of a million additional and avoidable death from COVID-19 is terrifying. However, others will point out that this is "only" 0.3% of the US population, and that the chance to die of COVID-19 is much lower than 0.3% for anyone who is younger than 50 years and healthy. Many of the protestors who demanded a lifting of stay-at-home orders in the US stated that they would be happy to accept the risks. At least one person has carried a sign demanding to "sacrifice the weak", but many protesters have carried signs indicating that they regarded their "rights" as more important that preventing COVID-19 infections and deaths. President Trump has repeatedly encourage these protests, and indicated that he regards the performance of the economy as the most important measure. Therefore, we must conclude that he does indeed have an exceptional willingness to sacrifice - to sacrifice a million lives so that "the economy" can be "re-opened" faster.