Today, as we saw a near-record number of 2,174 COVID-19 deaths and 29,967 new COVID-19 cases in the US according to Worldometers, the White House has announced plans how to re-open the country. It's an absolute KILLER PLAN.

Here is what the transcript on the Guardian web site wrote about it: 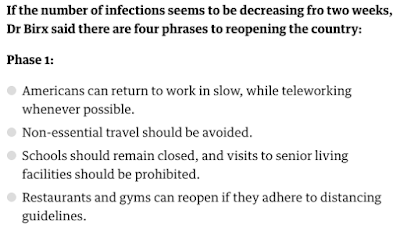 The plan will take effect after 2 weeks of decreasing infection numbers - so probably 2 weeks from now. Then it is back to work, and restaurants and gyms reopen. Next is phase 2 after another 2 weeks: 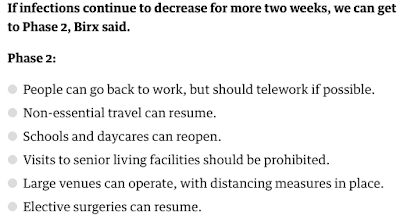 To understand how dangerous this plan is, I suggest to compare it to Austria's plan. Austria has managed to reduced the number of new cases per day by tenfold, from 1,321 cases on 3/26 to 126 cases today. Their reopening plan? Allow many stores, especially small stores, to re-open. Now in the US, many of these stores were never closed! Hardware stores and supermarkets, for example, stayed open in (almost?) all states.

In contrast, the US has managed to drop new infections from about 35,000 per day down to about 30,000. Hmm. Let's look at a computer model of what may happen: 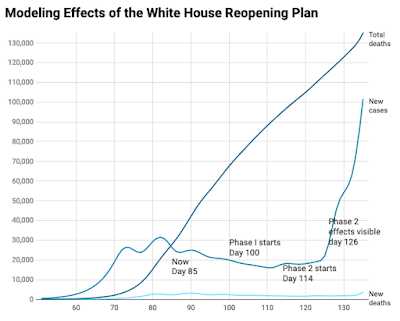 We are at around day 85 in this model, which is reasonably close to the US reality. New case numbers have stabilized and are starting to go down a bit. They may well keep going down slowly; the model assumes they are at R=0.85 now. So about two weeks from now, we go to phase I. Some of the Democratic states, especially those hit hardest, will be a bit hesitant to open up again. Some people will be, too. So let's assume R goes up just a little, to 1.1. Then, we also have to take into account the delay in new case reporting. It takes 5 days for the first symptoms to appear; another 3-5 days for them to get serious; and often another 2-5 days to get a test and the results. That's easily a delay of 12 days, which the model assumed.
Anyway, there's only a little blip around day 114, but numbers are still lower than 2 weeks ago. So on to phase 2! At this point, even the skeptics start relaxing, and live slowly goes back to normal.

But a lot of people still have COVID-19 infections, and many of them do not know it because they have no or light symptoms. So the transmissions go up again. For the model run, I assume they go up to 3.0. That's actually a lot less than we had a few weeks ago, when R exceeded 5.0.

Due to all the delays, we will not see any increase in new cases until about day 126. But then, numbers go up very quickly. For the sake of argument, we'll assume that the reaction this time around will be quick, and that on day 135, we'll all be under stay-at-home orders again, and stick to them as well as now.  Do what's the effect? Check this graph: 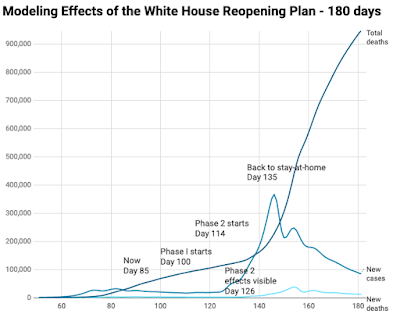 This is the same model run as above, but I let it run for 180 days. Even though phase II lasted just 3 weeks, and transmission levels did not reach those we have already seen, the number of new cases goes up very rapidly. The slowdown, however, is not nearly as rapid, as I showed in my last post. So there will be a lot of new cases for a long time. With the fatality rates that we have seen so far, that would mean close to a million deaths in within less than 100 days from now - in about 3 months.

This is just an illustration of what could happen. Actual numbers will differ, but it will most certainly be much worse than most people think - largely because of the "hidden growth" and the delays before we the alarms start going off.

So here is what re-opening guidelines should look like:
Many of these items will be on other lists of what must be done before re-opening. Unfortunately, most of these items are missing on the White House list.