COVID-19 Transmissions at Work and Restaurants

In view of the ongoing "re-opening" of the US economy, it is important to understand the risks of COVID-19 transmissions at work places and restaurants. This post looks at studies that describe such transmissions. A critical element in these studies was that they describe cases in cities with intensive contact tracing and relatively low numbers of COVID-19 infections.

The first study it titled "COVID-19 Outbreak Associated with Air Conditioning in Restaurant, Guangzhou, China, 2020". It describes the detailed conditions where one infected person infected 9 others. Here is a figure from this study that shows the seating arrangement: 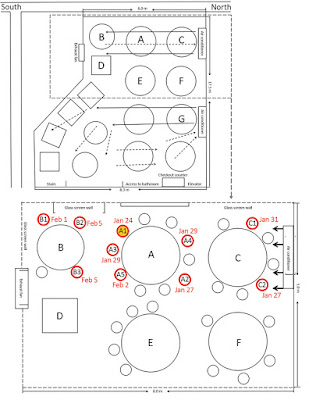 The infected person, A1, infected at least one person on the table he was sitting on, as well as at least one person on each of the neighboring tables. Note that the distance to the people on table C who got infected was about 10 feet - significantly more than the distance of 6 feet that is suggested in the US. The families on table B and C were seated next to the family on table A for a period of about 1 hour each (the article gives exact times in minutes, most likely based on cell phone location data).

It is likely that transmission of COVID-19 happened through aerosols. Very small droplet can remain suspended in air for extended periods of time. The air conditioner next to table C created airflow that moved the virus-laden aerosol droplets around the room.

The second study is titled "Coronavirus Disease Outbreak in Call Center, South Korea". It described a cluster of 97 COVID-19 infections in skyscraper. Of these, 94 happened in a call center located on the 11th floor, where 43.5% of the 216 employees were infected. Here is a layout of the office that shows where the infected persons where working: 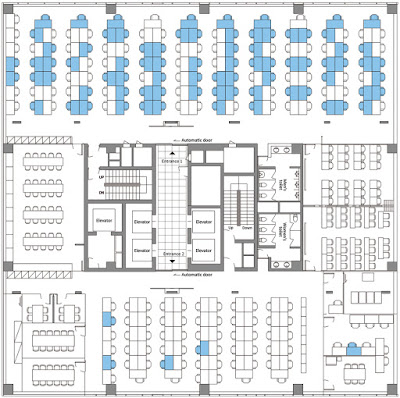 The transmissions here happened over a period of about two weeks. In theory, it is possible that the infections happened mostly through close contact, for example because the employees also shared elevators. However, face masks are generally used by almost everyone in South Korea when in public, and probably were commonly used during elevator rides, too. Given the distribution of the infections, it seems probable that at least some of the transmissions also happened through aerosol transmissions.

A third study described three different clusters in Singapore of which one was from a work-related conference. This cluster included 7 cases among conference attendees, which later led to 13 known secondary transmissions in France and Malaysia. Some of the transmissions probably happened during a 3-hour dinner where some of the participants share a table; other transmission may have happened during breakout sessions or team-building exercises.

These examples illustrate that restaurants and offices can create substantial risks of COVID-19 infection. It is likely that aerosol transmission can play a major role in the transmission in these settings. The SARS-CoV-2 virus multiplies in the lung, and small virus-laden droplets are formed and exhaled with every breath. In air-conditioned office buildings, the humidity is usually low, which means that the water in exhaled micro-droplet can evaporate within seconds, leaving smaller and lighter "core" particles that can remain airborne for extended periods. Such particles can easily travel distances larger than 6 feet, especially when significant air movement from air conditioning is present, and then infect others.

In shared office spaces, most workers will have no or very limited options to reduce the risk. Increased ventilation can remove aerosol particles quicker, if the ventilation actually replaces the air with fresh air, rather than just re-circulating air. Other options can include staggered shifts, the use of face masks, or work from home, but such options will not always be available, or may have only limited effectiveness.

In contrast, dining in restaurants is often optional, and must be weighed against potential health risks. While the actual risk of dying from a COVID-19 infection for younger people without medical conditions is low, the risk of severe symptoms that require an extended hospital stay is substantial. Many COVID-19 patients have received "surprise" hospitals bill for co-payments, visits from doctors that were not part of the "preferred provider" network of their health insurance, and other charges that were not covered under special "no-copay" COVID-19 rules. Even if covered by an insurance plan that does provide 100% coverage for COVID-19 related health care, there is a significant chance that a test for COVID-19 returns a false-negative result, and that general co-payments and deductibles apply.  One survey of studies found reports of false-negative rates ranging from 2% to 29%. Other studies have shown variability depending on swab type used;  where the sample was taken; the day after infection that the test was performed; and which machine was used for the test.
at May 02, 2020