How To Not Count COVID-19 Death

In yesterday's post, I described how the analysis of data from CDC web page titled "Excess Deaths Associated with COVID-19" showed that up to 5,310 excess deaths per week in the US are not attributed to COVID-19 (in addition to up to 16,203 deaths per week that were COVID-19 was listed as a cause of death). That prompted me to have a closer look at the detailed data that are available for download from the CDC web site. Here's a graph that shows one of the things I found: 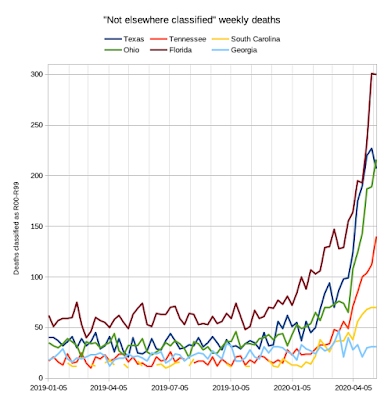 
"symptoms, signs, abnormal results of clinical or other investigative procedures, and ill-defined conditions regarding which no diagnosis classifiable elsewhere is recorded"

This includes a range of codes (R00-R99) that describe symptoms or abnormal lab findings, with code R99 reserved for "Ill-defined and unknown cause of mortality". Note added 6/15/2020: Apparently, the R99 code is also used for "Pending", and some deaths may take several months before the "Pending" classification is changed to a final classification, often in a different category.

The graph above shows that in 2019, these codes were used more or less the same every week of the year, with some week-to-week variations. But for 5 of the 6 states shown, the number of weekly "mystery deaths" increased markedly sometime in February to March, reaching levels that were more than 2 to 5 times higher than in 2019. Here is a look at the raw data for March to May 2020, and the same period in 2019, for the entire USA: 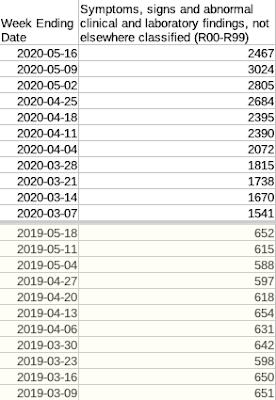 For the US, the "mystery death" numbers more than doubled at the beginning of March, and kept increasing to about 5-fold of the historical level in May (note that data for recent weeks are incomplete, and are likely to increase as more death certificates are submitted to the CDC). Overall, the deaths listed in the "mystery" category R00-R99 account for roughly half of the excess deaths that do not list COVID-19 as a cause of death.

The increase in "mystery deaths" is seen in the weeks where the total number of deaths is higher than expected, so all the "mystery deaths" are in addition to "normal" deaths - they are excess deaths. There are several possible explanations for this:
It appears quite unlikely that an unknown disease would cause the deaths of more than 2,000 people per week, distributed over many states, without being detected, and that the disease would cause deaths in the same weeks as COVID-19. So the second explanation is very unlikely.

There are, however, multiple factors that support the idea that the "mystery" deaths are indeed undiagnosed COVID-19 deaths:
Overall, it is very likely that the vast majority of excess deaths classified as "mystery deaths" were caused by COVID-19. Historically, about 1.25% of all deaths were "mystery deaths", so that numbers above 1.25% indicate "hidden" COVID-19 deaths. So let's have a look at what percentage of deaths were classified in the R00-R99 "mystery death" category for the US states for the four week period ending 5/16/2020: 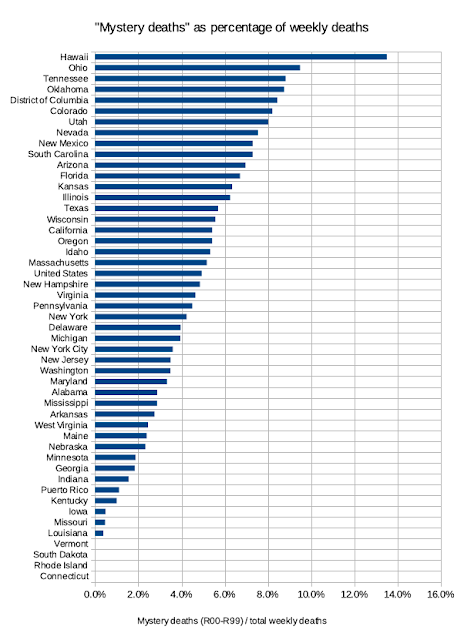 38 states, as well as New York City and the District of Columbia, show significantly increased "mystery death" rates. Four states (Vermont, South Dakota, Rhode Island, and Connecticut) show 0% mystery death rates; all of these states except Connecticut reported  no mystery deaths in 2019, either.
The number of COVID-19 cases varies a lot between states. States with a high number of COVID-19 cases would be expected to have a higher number of undiagnosed "mystery" deaths from COVID-19. The graph below shows the ratio of "mystery" deaths to deaths where COVID-19 was reported on the death certificate: 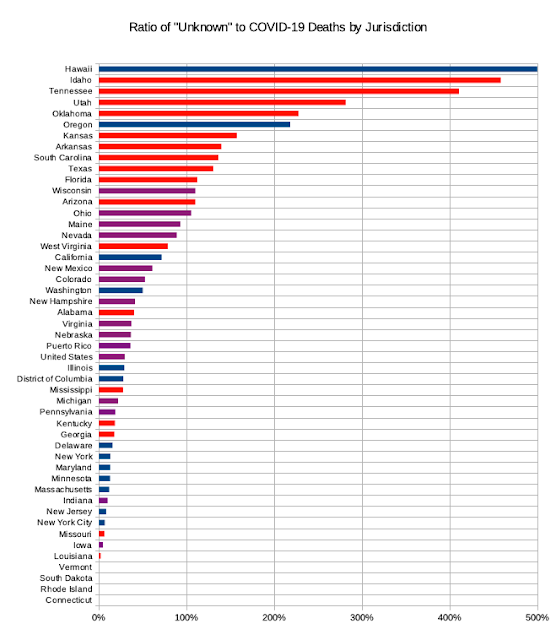 In this graph, I have also color-coded the bars depending on how the state voted in recent elections, using red for Republican states, blue for Democrat states, and purple for states that have senators from both parties, or voted for presidents from different parties in recent elections. There is a strong, but not uniform, bias: Republican states are more likely to have more "mystery" deaths than COVID-19 deaths, while most Democrat-leaning states have more COVID-19 deaths than mystery deaths. Let's have a closer look at some states.

Hawaii shows the highest percentage of mystery deaths. In the CDC data, there was no COVID-19 death listed for Hawaii; however, the state has reported 17 COVID-19 deaths on its website. Hawaii is unusual in having a very low positive rate in COVID-19 tests: never higher than 3%, and around 0.1-0.3% for the last several weeks, with 55,336 tests performed and 652 confirmed cases. Nevertheless, the relatively high number of "mystery" deaths raises red flags, and deserves an explanation.

Tennessee is near the top in both graphs. Here's a detailed look at the reported data from 2020 and 2019: 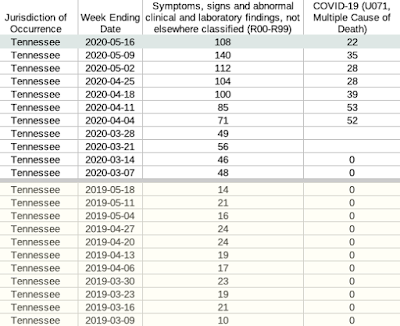 Relative to 2019, the number of "mystery" deaths more than doubled in April, and showed a 7-fold increase in the second May week. It appears that Tennessee has never reported even half of the COVID-19 deaths as such on the death certificates, and that this fraction has gone down further in recent weeks, while the number of "mystery" deaths has increased.
Tennessee is one of the states that was very eager to "re-open", and has removed  many of the initial restrictions on May 22, including 50% capacity restrictions on restaurants and retail stores.

Like Tennessee, Florida has reported that "mystery" deaths more than doubled in March relatively to last year, and then kept increasing into May: 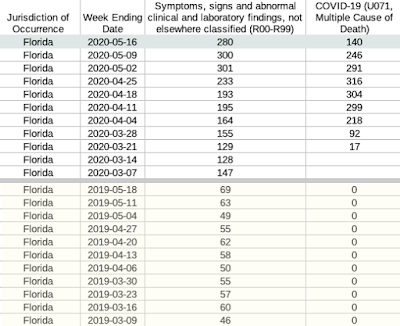 The reported numbers for COVID-19 deaths in Florida started declining in May, but the number of "mystery deaths" increased at the same time. Florida's governor has been very hesitant to issue a "stay-at-home" order, and has been very eager to re-open the state. There have been multiple reports about the Florida Department of Health trying to suppress information about COVID-19, including new restrictions about what data medical examiners were allowed to release to the public, the omission "snowbird" cases from published numbers, and the firing of the scientist responsible for Florida's COVID-19 database because she refused to manually change data. Florida has relatively high COVID-19 test numbers, but test availability varies widely, with testing being less available in poorer neighborhoods - where infection rates tend to be much higher.

Motive, means, and opportunity to "twist" the data to support the rapid re-opening of Florida all were present. The price, according to the death certificates? About 500 deaths per week. Perhaps the "not elsewhere classified" category is indeed appropriate: none of the other categories lists "sacrifice for the economy" as cause of death.
at May 31, 2020