COVID-19 Variability In US States

Here's a look at confirmed COVID-19 cases and deaths in the US, using 7-day average to smooth out day-to-day variations: 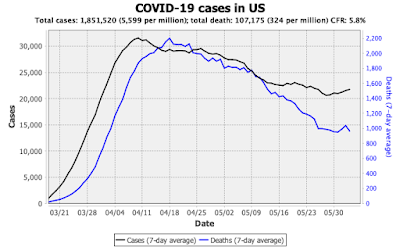 For comparison, here is the graph for Germany: 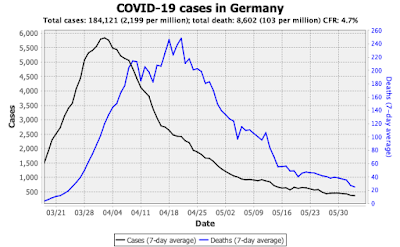 There is a remarkable difference in the offset between the case and death curves. In Germany, deaths rise and fall with about a 2-week delay, which is close to the about 19 days between symptom onset and death. In the US, the delay is only about one week, mostly due to longer wait times for tests and test results.

In general, the number of deaths and cases should fall by the same factor, but that's not what we are seeing. The relatively lower drop factor in cases in Germany is due to the delay between diagnosis and death; if we look at the case numbers 2 weeks ago, the "case drop factor" is also about 10. In contrast, the US shows a larger drop for deaths than for cases. This is partly due to insufficient test capacity during the peak of the epidemic. In many regions, but especially in New York and New Jersey, test capacity was so severely limited at the beginning of April that some hospital patients could not get tested, and wait times for test results sometimes exceeded a week or two. In addition, the ongoing ramp up of testing in late April and May also led to an increase in reported cases.

But when looking at the COVID-19 numbers for the US, we have to keep in mind that there were dramatic differences between states in case numbers and government interventions, which is reflected in the graphs for different states. The states that were hit hardest responded with the most stringent stay-at-home orders and other measures to contain COVID-19, which drove new infections and deaths down - here is New York as an example: 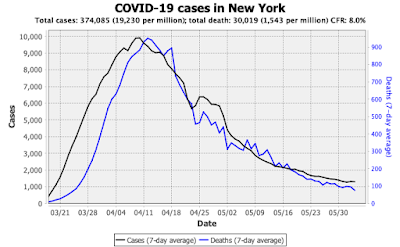 Daily deaths dropped by a factor of about 10, similar to the what we saw for Germany. But other states saw only relatively small drops, followed by relatively steady numbers for both cases and deaths. Georgia is a typical example: 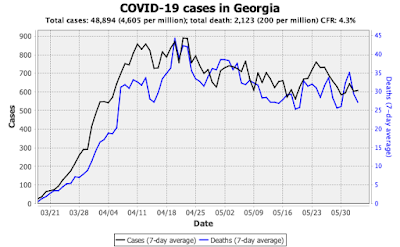 While most states issued "stay-at-home" orders, there were large differences between how strict orders were; whether or not they were enforced; and how long they remained in place. While most states ordered "non-essential" businesses to close, they had very different definitions on what exactly constitutes an "essential" business. Whereas New York closed down just about everything except groceries and hospitals, some states considered all construction-related business as essential and allowed them to continue to operate. Similar differences existed in closing public spaces like parks and beaches. Perhaps even more importantly, significant variation existed in adhering to local restrictions, and to suggestions or mandates to wear face masks.

A number of states with more "business-friendly" restrictions showed a relatively constant increase in new cases. One example is North Carolina: 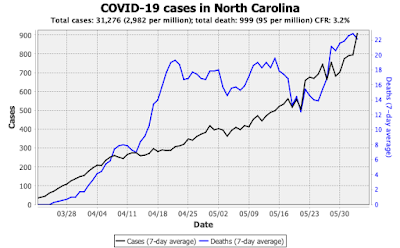 The relatively steady number of deaths between April 20 and May 16 indicates that some of the steady increase in cases is due to increased testing. However, the number of daily COVID-19 deaths only dropped briefly, and has since risen to new records; at the same time, the number of confirmed cases shows a steep upwards trend, indicating that the number of deaths will continue to grow in the next weeks.

Another interesting case in Utah: 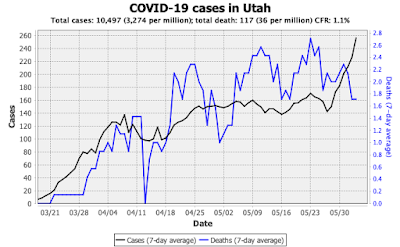 The daily confirmed cases show a slight upward trend from the middle of April to the middle of May, which is also seen in the daily deaths. For the last week, however, the number of cases is rising rapidly, while deaths seem to be on a downward trend. But a closer look at the CDC death certificate data and the analysis of "mystery deaths" indicates that Utah appears to be cheating: 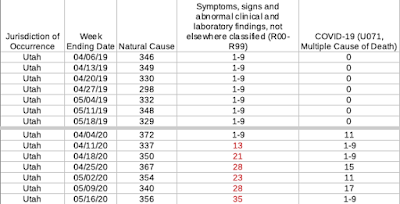 Since April 11, Utah has an increasing number of deaths that are in the "not elsewhere classified" category - "mystery deaths". Typically, Utah should have about 4-5 deaths per week in this category, corresponding to the historical average of 1.25% (the CDC spreadsheet masks all numbers between 1 and 9, so we don't know the exact counts for many weeks - but it will be close to 5). But the number on deaths in the "mystery" category has increased at the same time as COVID-19 cases, and actually to higher levels than the number of "official" COVID-19 deaths. For the week of 5/16, about 10% of all deaths in Utah were "mystery deaths". Considering that reporting of death certificates for recent weeks is typically incomplete, and looking at last years numbers, it appears that COVID-19 is currently increasing the death rate in Utah by 10%. But most of these deaths have been "moved" to the "mystery death" category, and do not get reported as COVID-19 deaths.

There is one plausible explanation for COVID-19 deaths being classified in the "mystery death" category: false negative test results. For properly performed PCR tests, the false negative rate should generally be less than 5%, but it can reach almost 50% for tests done on using Abbott's machine (for which the company blames "user error"). Even that would not explain the ratios we are seeing for Utah, though. However, one company that performs test in Utah, called "TestUtah.com", has been criticized for a what looks like an extremely high percentage of test failures: while other labs in Utah report positive rates of 5%, TestUtah reports rates of only 2%. TestUtah has declined to join other state labs in a test to confirm accuracy.  The same company has also received a no-bid contract in Nebraska under the name "TestNebraska", where it reported a 3% test positive rate, 6-fold lower than the 8% positive rate other labs reported. The company also failed to meet the contractual 48-hour turnaround time and test numbers; all this prompted state lawmakers to call for a termination of the contract in Nebraska. Similar problems have been reported from Iowa, where the company operates under the "TestIowa" name.

On the other hand, companies like TestUtah / TestNebraska / TestIowa may be quite welcome by governors and politicians that regard "re-opening" as more important than preventing COVID-19 transmissions and deaths. The Utah government has declared that "Utah’s social distancing efforts to slow the spread of COVID-19 have been working", and declared most of the state as "low risk" areas where all businesses are allowed to operate, with only 3 counties remaining in the "moderate risk" category, and no county in the "high risk" category. Between inaccurate COVID-19 tests and mis-diagnosed COVID-19 tests, it seems Utah is doing what it can to make COVID-19 "just disappear".  Unfortunately, other states appear to follow a similar approach, as I described in my last post.