The number of new COVID-19 cases in the US has been relatively stable overall, but huge differences between states exist: some are showing continuing declines, while others are reporting rapid increases in case numbers. This graph illustrates the dichotomy: 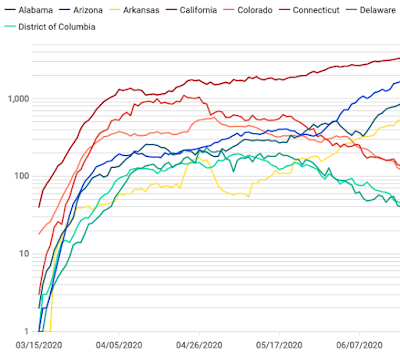 For the last three weeks, Alabama, Arizona, Arkansas, and California have shown increases in new COVID-19 cases, while Colorado, Connecticut, Delaware, and DC have shown decreases. Only a small fraction of the increases in most states can be explained by increased testing, as I explained in a previous post. Changes in testing do not explain the observed differences to states with decreasing case numbers at all, since testing has increased even in the states with lower reported case numbers.

So - how can we explain that many states show increases in COVID-19 transmissions, while many other states show decreases? One possible explanation are differences in when and how states "re-opened" by removing stay-at-home orders and social distancing restrictions. But while this may indeed explain some of the differences, it is unlikely to be the determining factor, given that most states have started re-opening several weeks ago, and that some states like California where many restrictions remain in place in large population centers nevertheless show increases. But a recent article in the journal "Health Affairs" provides another possible explanation: that differences in new COVID-19 cases are caused by differences in face mask wearing. So I decided to look into this.

According to the article, 15 states and the District of Columbia have issued mandates for face mask use in public, and the list of these states is given in the supplementary materials.  As an indicator of recent changes in COVID-19 cases, I used 15-day trend lines from my "data trend model", which are based on 7-day averages new case numbers from Johns Hopkins data. The slopes of the (log-based) trend lines give a good indication of where case numbers are going, with positive slopes indicating increases and negative numbers indicating decreases. I excluded the two states that had fewer than 10 new cases in the most recent 7-day averages, Montana and Hawaii. The data for the 15 states with the highest and lowest slopes are shown in the next graph: 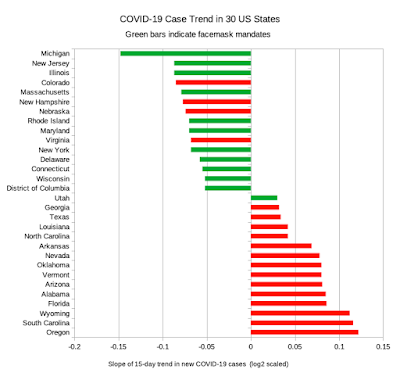 The 15 states at the top of the graph (Michigan - DC) have decreasing COVID-19 case numbers. 11 of the 15 states have face mask mandates. The 15 states at the bottom of the graph (Utah - Oregon) have shown increasing COVID-19 case numbers in the last 2 weeks; only one of the 15 states, Utah, was listed in the article to have a face mask mandate. However, the actual wording of the executive order issued on 4/10/2020 uses the word "directives", not "mandate" or "order", and does not mention any enforcement provisions or penalties. In an updated order from 5/27, the "directive" is explicitly changed to an "order", but only for certain business employees and health care settings; for the general public, only a "strong recommendation" to use face masks is issued.

Of the states shown as not requiring face mask orders in the declining groups, both Colorado and New Hampshire have issued strong recommendations to use face masks in public. Virginia's governor issued an executive order that requires face masks for "patrons" in most businesses, including retail and restaurants, and in public transportation.

The attitude towards face masks for states in the lower half of the graph, which report increasing COVID-19 cases, tends to be different. For example, the governor of Texas has issued an executive order that "bans local governments from imposing fines or criminal penalties on people who don't wear masks in public".

Even when orders or recommendations to use face masks exist, how many people follow the recommendations can vary significantly. Multiple surveys have shown that Democrats are much more likely to wear masks that Republicans, with reported mask wearing percentages of 75% vs. 53% according to one survey of 2,400 Americans, and 92% for Democrats versus 53% for Republicans in Minnesota according to another survey.  Of the 15 states with declining daily new COVID-19 cases shown in the graph above, only 3 (20%) were won by Donald Trump in the 2016 election; of the 15 states with increasing case numbers, 12 (80%) were won by Trump. Since Trump has steadfastly refused to wear face masks in public, many of his fans also refuse to wear masks.

The research study I mentioned above is just one of many studies that confirm that face masks are effective at reducing COVID-19 transmissions. Another study that used computer simulations showed that face mask can reduce COVID-19 infections and deaths significantly even if just a subset of the population wears face masks, with such reductions being higher if a higher percentage of the population wears masks. A meta-analysis that looked at data from 172 observational studies with a total of 26,697 patients concluded that "face mask use could result in a large reduction in risk of infection", with an reported "adjusted odds ratio" of 0.15.

Many researched had long suspected that face masks can be an important tool for containing COVID-19. This was based on the comparison of Asian countries where face mask use is common, and COVID-19 was quickly contained, to European countries where face mask use was initially strongly discouraged, and the COVID-19 epidemics reached much higher levels. Given what we have learned recently, it appears that face masks, when combined with basic social distancing, are even more effective than even optimists thought. One indicator of how well face masks work can be found in the statistics for European countries like Austria and Germany that have re-opened their economies without seeing an increase in new COVID-19 cases. A common factor in these countries if that face mask use in public is mandatory if social distancing cannot be maintained.

Ironically, the widespread use of face masks seems to be a critical element that allows re-opening the economy while keeping COVID-19 under control - but the president of the US, who has clearly stated that re-opening is his absolute priority, has consistently refused to use face masks.