My wife and I love spending our winters in Corpus Christi, Texas, so we're following what's going on there somewhat closely. The most recent data are shocking, as this graph illustrates: 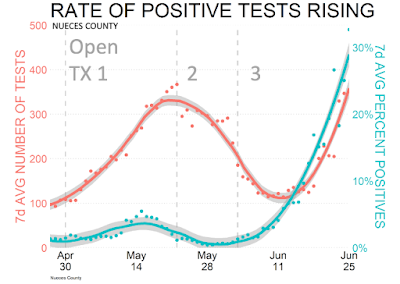 The graph is from the TAMUCC-COVID19 task force report, which is worth a look.
Note that the positive rate for the tests has gone up very rapidly, and now is above 30%. That indicates that not enough tests are available, which is confirmed by a news report (note the word "tests" is missing after "nucleic acid").
The city of Corpus Christi reports 274 new cases today (6/30). How does the situation compare to New York City in March?
The county that Corpus Christi belongs to, Nueces County, has a population of about 360,000. The NYC population of 8.4 million is has about about 23.3 times higher; adjusting the Corpus Christi numbers to the NYC population gives about 6,400 cases per day. The highest number of daily new cases that NYC reported was 6,376 cases on April 6. For the same day, NYC reported a positive rate of 57%.
A big difference between NYC and Corpus Christi is the age distribution of the people testing positive for COVID-19. In NYC, the 75+ group had the highest number of reported cases, about twice as many as the 18-44 group.  In Nueces County, the groups of 20-39 year olds had the highest per capita rate. Part of this difference may be due to extremely limited testing in NYC, where testing was largely limited to patients with severe symptoms; but it is likely that a more important reason for the observed difference is linked to behavioral differences.
In view of the lower positive rate and the differences in the average age of persons with a positive test result, Nueces County is not yet in as critical a situation as New York City was at the beginning of April. But is must be noted that the peak in infections in NYC was observed almost two weeks after a strict stay-at-home order had been issued, which was enforced by police. In contrast, the order issued for Texas is just a small rollback from near-complete reopening; for example, restaurants are allowed to remain open at reduced capacity, and public meetings up to 100 people are allowed, with no limits on meetings for religious purposes, sporting events, and many other exceptions. The Nueces County judge has issued a "Facial Coverings Required" order, but it applies only to some government buildings and most stores with the qualifier "when in a space that will necessarily involve close contact (areas where six (6) feet of separation is not feasible) with others". But effectively, this is only a recommendation, since paragraph 10 of the order states:
"Consistent with Abbott's Order, no civil or criminal penalty will be imposed on individuals for failure to wear a face covering."
In view of strong opposition that many Texans have displayed against using face masks, it remains to be seen how effective the order will be. If it is ignored by a significant part of the population, it is likely that the infection rate in Corpus Christi will reach or exceed New York City levels. Initially, the rate for deaths from COVID-19 in Corpus Christi is likely to be lower, since mostly younger people are currently infected. But over time, the infections will likely spread to all age groups more evenly, which will result in a corresponding large increase in COVID-19 deaths.
at June 30, 2020

Email ThisBlogThis!Share to TwitterShare to FacebookShare to Pinterest
Labels: Texas