The US  relies primarily on "social distancing" measures fight the COVID-19 epidemic. To some extend, this is based on computer models that predict that such measures will be successful. However, experience in multiple countries has shown that partial and voluntary social distancing measures are not very effective. Many countries in Europe have increased the measures multiple times, with increasingly stricter measures up to "stay home" orders and closures of non-essential businesses for entire regions.

One of the major limitations of computer models for epidemics is that they are often based on a simple infection model that does not seem to apply to COVID-19. Briefly, the models assume that the chance of getting infected is directly proportional to the number of close contacts an uninfected person has. Models generally link this number of contacts directly to the reproduction number R. The goal is to drop R below 1, which means each infected person will, on average, infect less than one other person. Once this state is reached, the epidemic will eventually stop.

In many studies, it is assumed that reducing contacts will directly reduce R. In COVID-19 studies, the initial reproduction number (called R0, R zero) is often assumed to be close to 2. The (faulty!) logic is that if contacts can be reduced by a bit more than 50 percent, then R should drop below 1, and the epidemic should be contained. For example, if contacts are reduced by 75% because many people stay home, and those who can not stay home do keep distance from others, the assumption is that this should be sufficient.

However, there are multiple reasons why this approach is overly optimistic, at least for COVID-19. In this post, I will focus on just one of these issues: the effect of sub-groups.

The source of the problem is that different people have very different perceptions of risk from COVID-19. Since many regulations are either voluntary or not enforced, those who perceive the risk as low often do not change their behavior more than absolutely necessary. Such behavior is often concentrated in groups that tend to interact socially, as this recent picture from Bondi Beach in Australia illustrates: 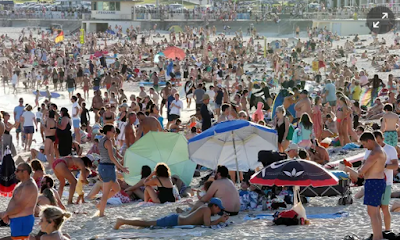 It is reasonable to assume that in such subgroups, the number of social contacts is virtually unchanged; therefore, the risk of infection for this subgroup is not adequately reflected in simplistic computer models.

A related problem are infections that occur at work. While some companies can let their workers work from home, or temporarily halted operations, many people continue to go to work everyday. For them, the risk of infection from work interactions remains; for some of them, like grocery store workers, medical professionals, and first responders, the risk can actually be substantially increased.

I have modified my simple computer model to take such sub-grouping into account. I could give it fancy names like "Group-specific Markov-chain iterative implementation of SIRS models", but it's really pretty simple. I just let my group of infected people grow, generally using parameters that are reasonably well known, and tuning them so the predictions matched the reported COVID-19 deaths in the USA. At the day that the federal "15 day guidelines" to stop COVID-19 were announced, the model split the population into 2 or 4 groups with different risk characteristics. Let's have a look at some results:
Let's start with the blue line. It shows the predicted the number of deaths if no interactions had taken place, and infections had continued to grow as they did until March 16. The maximum number of deaths is about 140,000 per day. This does not take the higher mortality from ICU overloading into account, but is nevertheless higher than what many other models predict. But do not focus on the absolute numbers, the issue at hand here are the relative effects of interventions and subgroups.
The red line shows the effect of a 20% reduction in contacts. The effect is small, limited to a slight delay and a small reduction in maximum deaths per day. A 50% reduction (yellow line) in transmissions per infection leads to a more pronounced delay and a visible flattening of the curve. At an 80% reduction (green curve), the maximum number of deaths per day drops below 400, a dramatic reduction. My model uses an R0 around 3.7, so the 80% reduction reduces the reproduction number to less than one. This also was assumed to happen right after the announcement on 3/16, when the number of confirmed cases was about 30-fold lower than today. All these curves are very similar to what other models predict; the main difference is that models which use a lower R0 will show a dramatic drop at a lower percentage reduction.

The violet curve was generated using a model that assumed two groups of even size after the announcement: one group reduced contacts a lot, enough to have 80% fewer transmissions in the group; but the other group pretty much ignored the guideline, and transmissions in this group went down 20%. The result for the two groups together is that the curve was mostly scaled down 2-fold, which reflects a rapid spread of the infection in the "ignorer" group.
This separation is obviously simplified, so let's look a the light blue curve. Here, we separated the population into 4 subgroups:
This "almost realistic" mix of groups sees a maximum death rate of about 20,000, seven-fold lower than without interventions. While this is a notable drop, it still results in more weekly new infections than there are ICU beds in the US, and ICU overloading is at least possible.

Let us have a look at the total cumulative number of deaths predicted for each scenario: 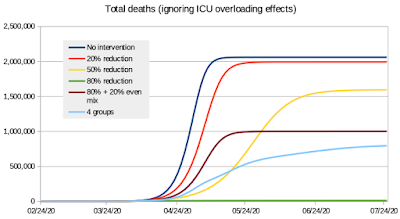 Without interventions, the total number of deaths is above 2 million, very similar to what the study by the ICRF group in London predicted. A 20 percent reduction in transmission rates changes little, and even a 50% reduction still leads to about 1.6 million deaths. Our "almost realistic" mix of four groups (the light blue line) shows a slow and steady rise of fatalities from COVID-19, even though 90% of the population experience reduced transmission rates, with half of the population seeing a 10-fold reduction in transmissions which may be hard to reach in the real world. Note that the model assumes that all containment measures would remain in place for the entire duration of the model run; and relaxation would cause a secondary flare-up.

The results above illustrate clearly that "social distancing" measures will only have the desired effect when they are observed by virtually everyone. If substantial groups of "non-believers" continue to have social contacts within a similar-thinking subgroups, the effects of such measures are much reduced. Similarly, the effectiveness of social distancing measures can be dramatically reduced if large subgroups of the population continue to work in group settings, and by groups like grocery store workers, medical professionals, and first responders that do not have adequate access to protective gear and other protective measures.

These computer model results clearly show some major limitations of voluntary social distancing. COVID-19 containment strategies that primarily rely on voluntary social distancing measures are likely to fail, as was observed in Italy and Spain. Once widespread community transmission and high case numbers are seen, as is the case for the US and many European countries, border closures and checks will have only very limited effect.

To contain the COVID-19 epidemics until vaccines become available, a multiple number of complementary and mandatory measures are needed - social distancing is not enough. All countries and regions that have had success in containing the epidemic, including Taiwan, Singapore, Hong Kong, and South Korea, applied a large number of complementary containment measures. Trying to rely on a minimal and voluntary set of measures is not optimistic - it is deadly.
at March 31, 2020