Why Stopping COVID-19 Is So Hard

From the new case numbers for COVID-19 infections on the worldometers web site, it is clear that many countries are struggling to contain the COVID-19 epidemic: 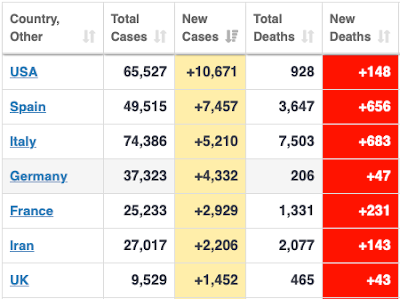 Many  countries show 15% to 20% new cases per day, relative to total cases. This indicates that the growth of the epidemic there is still exponential, with a doubling of cases every 3 to 5 days. If such growth continues for 30 to 50 days, then the number of cases will grow one thousand fold in each country! But even though all countries in the list above have implemented social distancing measures, the numbers keep growing. In this post, I will look at some of the reasons why this is happening. Some of the ideas are based on this post by a disease epidemiologist that is definitely worth reading.

A lot of advice on the web is similar to what the CDC still advises today:

Yes, you definitely should stay home if you are sick. But this message can also be read as "if I am not sick, I do not need to stay home". That is wrong! Multiple studies have shown that corona virus transmissions can occur before symptoms start. Some people never develop symptoms after infection, but can still spread the infection!

Compared to other epidemics like SARS, MERS, or Ebola,  COVID-19 seems almost harmless. If has often been compared to the flu, which is very misleading (because it is 5-10 times more deadly, and for other important reasons). COVID-19 kills mostly elderly people and people with medical problems. This gives healthy, younger people the feeling that they have nothing to be afraid off. Together with problem 1 above, they conclude it is perfectly fine for them to ignore social distancing rules, and "party on". This has been seen all over the world - at spring break in the US, beaches in Sydney, the English Garden in Munich, and just about everywhere else.
But young people can still get infected, and often got infected at higher rates due to close contacts in large groups. They then transmit the disease to others, including older people who will die from the infection.


Problem 3: This seems to easy to understand

Many people know about the first two issues. The next set of problems describes issues that are more complex or obscure, but at least as important. But humans have a strong tendency to take simple explanations and view them as sufficient, ignoring more complex issues.
Take, for example, social distancing: if we need to reduce transmissions by 80%, then it should be enough if 80% of the people stay home, right? That seems very intuitive, and some lovely animations on the web even seem to "prove" it - but it is quite wrong.
Similarly, if you can transmit the disease for 14 days, then we all should be fine if we stay home for 14 days, right? Again, wrong!
The "80%" and "14 day" issues are so intuitive that everybody understands them. How about combining them? Would it not be enough if 80% of the people stay home for 14 days? Absolutely not!
But since this seems so intuitive, lots of people think they fully understand this, and ignore the warnings of experts.

Epidemiologists sometimes look at the spread of diseases like COVID-19 as a single, coherent group. That is done to keep things simple and can provide some useful insights, but also has limitations.
One example is the different behavior of subgroups.
Let's say we have one large group (80% of the population) that stays at home, while the remaining 20% do not change their behavior. Let's call them "the Fearful" and "the Springbreakers". With much fewer people out in public, we could theorize that the Springbreakers have less contact with others, and that this would cause transmission rates to drop. But in reality, the Springbreakers have always been around other Springbreakers, and mixed little with the Fearful group. So within their group, the COVID-19 transmission rates are largely unchanged, and the epidemic will spread until most people in the group are infected (unless they change their behavior and switch to the Fearful group).

The next thing to look at is what happens in the fearful group. If they would all retreat to their own rooms and stay 100% isolated all the time, they would not infect anyone else. Once the current infections run their course, the group would be COVID-19 free. That would take about a month - most infections are over after 14 days, but some take longer, especially more serious cases.

In reality, though, most of the Fearful will be living with others - families, boyfriends and girlfriends, or room mates, and stay in close contact with them. Being closely together 24/7, anyone infected will likely infect others in the same group. In the US, the average household size is 2.6 people, so we would expect the number of infections in the fearful group to grow more than 2-fold even if they stay at home 100% of the time, without any contact to the outside world.

Another mental trap that we easily fall into is about getting infected. If we change our behavior so that the number of times we might get infected is reduced by 80% (for example by going shopping every 10 days instead of every 2 days), does that mean we reduce the overall change of getting infected by 80%? No, absolutely not! If shopping gets us infected, then the only thing we have changed is how long it takes to get infected.
One way to think about this is that everyone can get infected multiple times. Usually, we only care about the first time. But if we want to avoid infection completely, we have to avoid all chances to get infected.
The effect of this is that a given reduction of social contacts will not result in a proportional reduction in transmissions. To reduce transmissions by 80%, we need to reduce chances of getting infected by a much larger percentage - possibly as much as 99%!

COVID-19 is a very sneaky disease: it spreads very quickly, but symptoms develop slowly, and deaths come after a relatively long time. Some studies have estimated that the virus starts to spread just one or two days after infection. Typically, the number of infected people doubles every 3-5 days. First symptoms show up after 5-6 days on average; death typically occurs about 18 days after symptoms start. In countries like the US where the doubling time is 3 days and testing is mostly limited to people with disease symptoms, this means that confirmed cases will always be at least 4-fold lower than the number of infections. The 24-day delay between infection and death corresponds to eight successive doublings - that is a 250-fold increase! In other words, the epidemic is likely to appear orders of magnitude less severe than it really is during the early phases judged by deaths, and many times less severe  during the entire growth phase.
This is a very hard concept to grasp. For politicians, it is easy to get a false sense of security, and it may seem hard to justify the drastic actions that would be needed to stop the epidemic early. Hence, it is no surprise that the countries that had the most success in containing the COVID-19 epidemic are countries that were hit hardest by the SARS and MERS epidemics, and/or geographically close to the epicenters: Hong Kong, Taiwan, Singapore, and Macau. Almost all other countries were fooled by the initial low numbers of confirmed cases and death, and reacted too slowly.


The Hammer and Dance

I believe that all the problems above explain why many countries all over the world have had limited, if any, success in containing the COVID-10 epidemic. The natural tendency to respond with denial to difficult issues only aggravates the problems.

To contain the COVID-19 epidemic, drastic actions are needed now, followed by continuous measures that prevent a second flare-up before a vaccine is available. This is beautifully explained as in this article: The Hammer and the Dance.  I strongly suggest that you read it. Just a few comments to the article:
With every week that passes by without drastic measures, the number of infections in the US grows by a factor somewhere between 2 and 4. A few states have taken measures to contain the spread, but there are many more that have, at best, taken halfhearted measures, often because the local reported numbers are still low. They continue to fall into the traps I described above, and delay action when it could be most effective: while the number of infections is still low. Often, the lack of action is justified with the fear of economic consequences. But the longer the containment measures are delayed, the longer they will have to remain in effect, and the more severe the consequences will be.
at March 25, 2020