Recently, media headlines reported that an "important" computer model now predicts more than 400,000 COVID-19 deaths in the US by the end of the year. I have described in earlier posts why I am not a fan of this particular computer model, so I'll just ignore the model. However, I'll have a closer look at the question if we may indeed see 400,000 deaths linked to COVID-19 in the US before the end of the year.

At first glance, the number of 400,000 seems too high. So far, the official COVID-19 deaths numbers in the US are below 200,000, and many people think even this number is an overstatement. So let's look at a graph to get started: 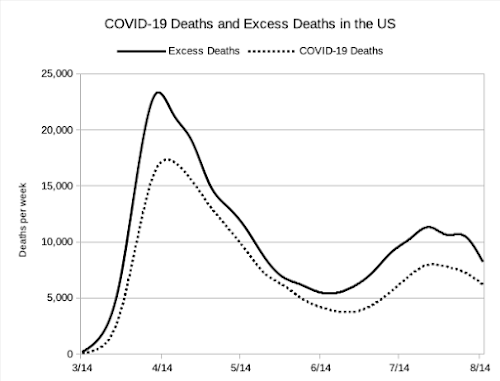 The graph shows the weekly number of COVID-19 deaths, based on death certificates submitted to the  National Center of Health Statistics, as a dotted line. It also shows the number of "excess deaths" as a black line. Here's a short section from the data file that I downloaded from the CDC web site to generate the graph that explains the "excess deaths":

All lines show data for the week that ended on 8/15/2020. In the first line, the numbers show data only for the deaths certificates that have already been reported to the NCHS. Some states and counties are very slow to submit their data; typically, it takes 6-8 weeks for 99% of all death certificates to be submitted. When the data file was generated on 9/9/2020, a total of 55,145 deaths had been reported for the week. From previous years, the CDC has a pretty good idea how many deaths would have typically occurred in this week: 51,639. For example, the number of deaths reported for the same week in 2019 was 51,128; the expected number is based on data from the last 4 or 5 years, which eliminates most week-to-week fluctuations.

So for the week of 8/15, the number of deaths certificates received so far by the NCHS was 3,506 higher than expected - in other words, there were 3,506 reported "excess deaths". But the CDC knows that the data are incomplete, and can estimate how many "late" deaths certificates will arrive in the next months. This number is shown in the second line, where the Type is listed as "Predicted (weighted). The numbers indicate that the CDC expects to receive almost 5,000 additional death certificates, which will result in more than 8,000 excess deaths for the week. When the same extrapolation is applied to all recent weeks, the calculated number of excess deaths for 2020 (up to 8/29/2020) increases to 252,307.

In the graph above, the number of excess deaths very closely follows the number of reported COVID-19 deaths. This is also true when we look at the data for individual states and regions, for example New York City and Texas: 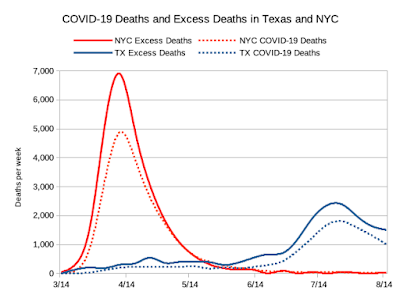 This is strong evidence that the actual number of COVID-19 deaths is significantly higher than the reported number of COVID-19 deaths - in fact, about 45% higher. One likely reason for this under-counting is that many COVID-19 victims have died without ever being tested for COVID-19, and often outside of hospitals. False-negative tests for COVID-19, which can easily happen if the PCR tests are administered too early or too late in an infection, are another possible reason.

But regardless of the reasons, it is a proven fact that the number of deaths linked to COVID-19 in the US is significantly larger than the reported number of deaths. According to death certificate data, more than 250,000 people had died in addition to the "usual" number of expected deaths by the end of August. There are additional death, not people "who would have died anyway".

So, now back to the question if the US will reach 400,000 COVID-19 deaths before the end of the year. Rather than running complicated computer models, I'll just give you a "back of the envelope" calculation. As of today, the 7-day average of confirmed COVID-19 deaths is slightly above 700, or about 5,000 a week.  This is down from almost 1,200 deaths per day in early August. The drop closely mimics the drop in confirmed cases, which reached almost 70,000 per day in mid-July, but seemed stable in the low forty thousands before the Labor Day weekend.

If you read the media articles that I mentioned at the beginning of this post, you may have noticed that I have not considered many factors that may increase COVID-19 transmissions and deaths before the end of the year.  Some of these include:

Initial evidence of college re-openings has shown clearly that many students will be infected when living on or near campus. This is to a large extend because they know that their personal risk of dying of COVID-19 is extremely low; however, infected students will cause secondary infections in college and school personal, parents, and other community members, in general people likely to be older and at higher risk for severe or deadly COVID-19 symptoms.

Perhaps the most worrying factor is the potential that infections will rise during the colder seasons. we do not know if this will happen, but there are multiple potential reasons - from spending more time indoors, where transmissions are higher, to lower vitamin D levels from reduce sun exposure, which has been linked to more severe disease. But perhaps the most troubling indicator is that the list of countries with the highest number of COVID-19 cases now includes many countries from South America, which is just emerging from winter; some of these countries report extremely high case loads and COVID-19 deaths numbers despite strong government interventions to reduce transmissions.

If COVID-19 transmissions in the US rise again from the current levels, regardless of whether that is due to one of the factors listed above or to other reasons, then it is likely that the number of COVID-19 deaths will increase significantly, quite possibly exceeding half a million "excess" deaths.

We'll know for sure sometime early spring next year, when most death certificates for 2020 have been submitted to the CDC.