Today, the CDC published a study that looked at the excess mortality linked to COVID-19 in the US. As I explained in previous posts, "confirmed cases" and even official COVID-19 death numbers paint a sometimes misleading picture, since such numbers are distorted by many factors, including test availability, the willingness of people to take tests, and test accuracy. But the one number that is not subject to any of these problems is the number of people who have died, compared to previous years.

Based on the analysis of death certificates submitted to the CDC's "National Vital Statistics System", the CDC reports that 299,000 more people have died this year than in previous years - in other words, the US had almost 300 thousand additional deaths. Only 198,081 of the death certificates listed COVID-19 as a cause of death. I explained possible causes for this discrepancy in a previous post. The predominant cause for additional deaths that do not list COVID-19 as the cause of death are missing positive COVID-19 tests. One clear indicator is that excess deaths are very closely linked to COVID-19 deaths.

The official COVID-19 death counts include only 2 out of 3 actual deaths linked to COVID-19 in the US. To get a realistic picture of the deaths that COVID-19 has caused in the US, take the official reported numbers, and add 50%. For example, the 220,000 deaths reported yesterday (10/19) by Johns Hopkins University correspond to a total of 330,000 excess deaths due to COVID-19 in the US. Spreadsheets with detailed numbers that are updated weekly are available on the CDC web site.

Excess death analysis is also a very useful tool to compare the severity of the COVID-19 pandemic in different countries, which often have very different testing policies, capacities, and COVID-19 reporting rules. A study that was published last week in Nature Medicine looked at the death data from 21 different countries for the first phase of the pandemic, from mid-February to May. Here is a graph from the study that summarizes the results (click on the image for a larger version): 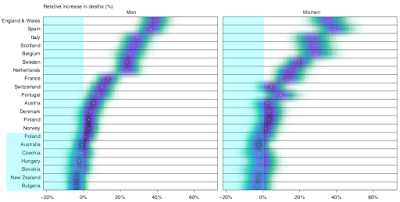 The countries that had the highest excess mortality were Spain and England & Wales, where deaths increased by about 35-40% during the period studied. The next group of countries includes Italy, Scotland, and Belgium, closely followed by Belgium, Sweden and the Netherlands, with roughly 20-25% additional deaths.

There are seven countries that did not show any significant increase in deaths: Bulgaria, New Zealand, Slovakia, Hungary, Czechia, Australia, and Poland. With the exception of Poland, all of these countries actually reported fewer deaths than expected. The study authors mention the reduction of work-related injuries during lockdowns in these countries as one likely reason for the observed reduction in death.

Three countries (Norway, Finland, and Denmark) had excess death rates below 5%; overall, almost half of the countries studied (10 of 21) reported either no excess deaths, or an increase below 5%.

How does  the US compare?

I downloaded the latest data from the CDC web site to calculate comparable excess death numbers for the US, using the weeks ending 2/15/2020 to 5/30/2020. For the entire US, the excess death rate for this period was about 15.3% when using the numbers for reported death certificates only, or 16.3% if using the "weighted" data set that tries to compensate for late submission of death certificates. This number is roughly the same as what France reported.

However, the US is significantly larger than any of the countries in the study above, and closer in size to all of the countries combined. COVID-19 spread in the US in a regional pattern, with the northeastern states reporting the highest numbers from March to May: 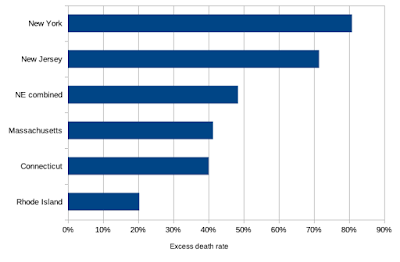 The five northeastern states shown (NY, NJ, MA, CT, and RI) had a combined excess death rate of 48.4% - significantly higher than any of the 21 states from the study above.

After the end of May, COVID-19 infections and deaths in most European countries and in New Zealand were at at least 10-fold lower than during the March to May period. In the US, the COVID-19 infections "moved" to southern and western states, which now experienced a large number of additional deaths: 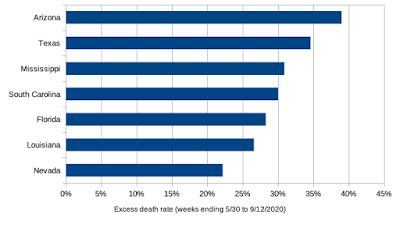 The excess death rates in Arizona and Texas during the summer months were similar to the rates seen in the worst European countries, Spain and England & Wales, in the spring. This is somewhat astonishing, considering that these states had several more months to prepare, and that some improvements in treating COVID-19 had been made in the meantime. Louisiana stands out because it reported excess death rates near 25% both for the spring and the summer periods.

In conclusion, the comparison of excess deaths linked to COVID-19 showed that the affected regions in the US have done as poorly as, or worse than, the European countries that had the highest relative increase in deaths. The primary causes are well known: lack of testing early in the epidemic; false statements by leading politicians about the severity of COVID-19; and an irresponsible push to re-open, ignoring even the minimal re-opening guidelines the administration had released.

In recent weeks, the state of the pandemic has diverged dramatically between the countries. While New Zealand has remained completely free of domestic COVID-19 infections and fully re-opened the economy, many European countries have seen a very rapid rise in COVID-19 infections. Most countries are issuing new restrictions, and the worst-hit areas have initiated a new round of full lockdowns.

In the US, COVID-19 case numbers have increased more slowly, from about 36,000 in the middle of September to almost 61,000 today (7-day averages). Given a weekly growth rate of 17%, the US will set new records for daily COVID-19 cases later this week or next week. If future increases in the US follow the patterns seen in Europe, the increases will likely accelerate further. It is quite possible that the US will see more than 100,000 new confirmed COVID-19 cases per day before election day (November 3). Reported COVID-19 deaths lag behind by about 2-4 weeks, but 7-day averages have started to increase over the last three days, from 704 deaths per day to 753.