In the last couple of weeks, several new scientific studies were published that provide solid evidence that face masks can reduce COVID-19 transmissions significantly. In this post, I'll briefly describe several studies, as well as other evidence from trends in the US.

One study that was published as a preprint compared the COVID-10 growths in 5 metropolitan regions in Missouri. Two of the regions, St. Louis City and St. Louis County, implement mask mandates in July, while the three other regions did not. Comparing the COVID-19 growth rates between the "mask mandate" regions and the "maskless" regions, the authors found significantly slower growths of COVID-19 cases in the mask mandate regions: 1.36% per day, almost 2-fold lower than the 2.42% observed in the maskless regions. This difference was significantly larger than the difference in growth seem in the weeks before the mask mandates were issued.

To see if this trend persisted after the time analyzed in the study, I downloaded per-county level data from Johns Hopkins University, and looked at the growth in COVID-19 cases from July 1 to October 27: 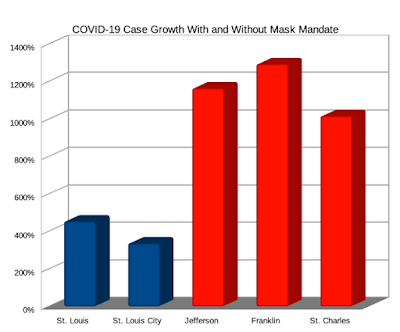 A second recent study examined how well face masks work in flights. It reviewed a number of previous studies, including one where a single passenger in business class had infected 12 other passengers in the business class cabin:

In stark contrast to this "superspreader event" flight is a series of flights with Emirates that arrived in Hong Kong in June and July. Overall, 8 flights transported 58 passengers who were COVID-19 infected during the flight. The flights were 8 hours long, and had a total of 1500 to 2000 passengers, who were quarantined and repeatedly tested for COVID-19 in Hong Kong. The testing showed that not a single transmissions happened on those flights. Emirates had a strict face mask policy in place at the time of the flights, which was enforced during the flights by flight attendants.

The review also describes a number of other flights, both with and without mandatory face masks, which show that the use of face masks during flights dramatically reduces the number of COVID-19 transmissions on flights.

While face masks mandates were common in Germany from the early phase of the COVID-19 epidemic on, the dates when mask mandates were issues varied by location. Two separate studies examined the resulting differences in COVID-19 transmissions, with focus on Jena, a city that implemented mask mandates early. One study presents qualitative evidence that face masks mandates reduced transmissions in Jena. The second study used "synthetic control methods" and data from 401 German regions to derive quantitative estimate, concluding that face mask mandates reduced the daily growth in COVID-19 infections by about 40%.

More evidence from US regions and states

A number of studies have focused on US states or regions, and come to similar conclusions as the studies above.  Here is a figure from one of these studies that shows a drop in COVID-19 infections after the introduction of mask mandates: 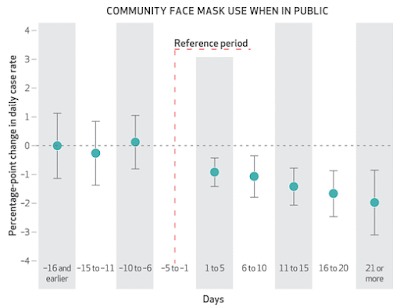 The effect shown is not as pronounced as in some of the other studies, which may be due to varying levels of adherence to the mandates, especially since enforcement of mask mandates in many US regions is lax or non-existent. Sadly, the use of face masks has become politicized in the US. Many Republican governors have refused to issue face masks; Republican law enforcement has been reluctant to actually enforce mask laws; and many Republicans refuse to wear face masks.

The effect of the "Republican refusal" can be seen when comparing which US states have the most COVID-19 cases over time. Here are a couple of screen shots from an illustrative animation: 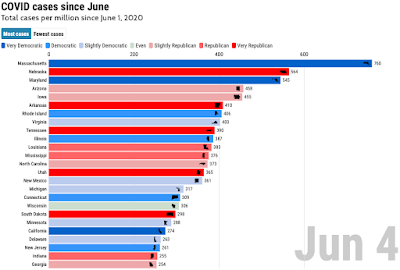 In early June, the most affected states were a roughly even mix of blue and red states. But by late October, the picture had changed dramatically: 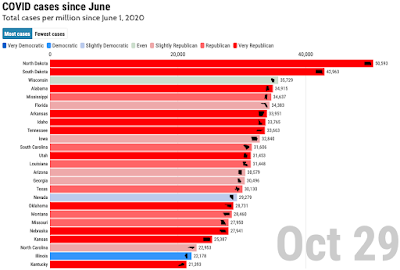 Now, Republican states dominate the distribution. Of course, other factors like early re-openings and resistance against new containment measures are also likely to play a role, but negative attitudes towards face mask wearing and face mask mandates are certainly a big factor in this development.

The evidence is very clear - face masks reduce COVID-19 transmissions and save lives. Scientists have a pretty good idea why and how face masks work. I have discussed why misguided "herd immunity" strategies won't work, using Texas as an example. For the US as a whole, just "letting it take it's natural course" would cost more than a million additional lives; when taking into account that death rates increase significantly when hospitals are overloaded, the number of additional deaths in the US would more likely exceed 2 million. Anyone who still believes that COVID-19 deaths are overstated in the US needs to have a close look at excess death calculations, which show that the official COVID-19 numbers represent only 2 out of 3 COVID-19 linked deaths.

So, please, if you go to an indoor space where other people are, or if you are outdoors in a crowd, or closer than 6 feet to someone else who does not live with you: wear a mask!