Why COVID-19 Is So Hard To Fight

In this post, I will use one graph to explain why COVID-19 is so hard to understand, and therefore to fight. It shows the daily confirmed COVID-19 cases in the US, and the 5-day change in daily cases, since the end of April: 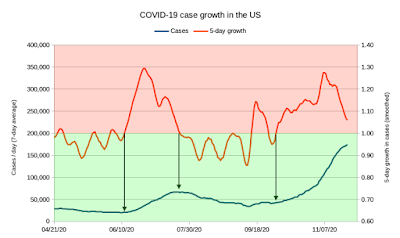 The red curve, which uses the y-axis on the right, shows an indication of the growth (or drop) in cases: the ratio of cases on a given day, divided by the number of cases 5 days earlier. When this ratio is below 1 (in the green section), case numbers are going down; when it is above 1 (in the light red section), the number of cases is increasing.

The numbers are based on 5-day periods because that is the roughly the average time between getting infected, and passing the infection on to someone else. In scientific jargon, this is often called the "generation interval" or the "serial interval". One way to understand it is to remember that it typically takes about 5 days after infection for symptoms to start, and that the chance of infecting others is largest just before and just after first symptoms.

Now take a close look at the values we get for R. In May and August when case numbers were dropping, R was between 0.85 and 1. In the summer and fall periods where case numbers were increasing, R was above 1, but never higher than 1.3. Typical values around 0.9 in "dropping" periods, and around 1.2 in "rising" periods. The difference is quite small - and therein lies the problem! To understand why, we need to look at this from two angles: the "personal risk" perspective, and the "public health" perspective.

When deciding what to do, in a public health crisis, the first question most people will ask is "What is the risk to me?" Depending on the answer, and on personal tolerance for risks, they may be inclined to change their behavior more or less. But regardless what exactly the answer is, everyone will have to accept a certain level of personal risk in the end.

After a few weeks or months of "being good" and, for example, staying away from restaurants and bars, the desire to go back to normal becomes stronger and stronger, and we start doing things again that are slightly more risky. That might be going to restaurants again; meeting with friends; going shopping; not wearing that face mask; or something else. But we'll generally decide that a bit more risk has to be taken. If we are young or healthy, we may well conclude a slight increase in risk still means a very low risk of getting seriously sick. Unless you're a statistician, you probably won't quantify the risk, but just about anybody would agree that a relative risk increase from 0.9 to 1.2 is so small that it's worth taking, if it means we can go back to the gym, the hair dresser, shopping, restaurants, or whatever strikes our fancy. If my personal risk was small to begin with, then even a 2-fold or higher increase in risk may well be worth it.

On a personal level, taking a bit more risk is a perfectly reasonable decision. This also is true if we consider others in our risk assessment, too - kids we send to school, other family members, or friends we meet.

But what happens if everyone decides that taking a bit more risk is perfectly reasonable, and changes their behavior a bit? Say, for example, in a way that increases the risk of getting COVID-19 by just one third. What happens?

What is a perfectly reasonable decision on a personal level becomes a public health disaster.

Small things are "driving the pandemic"

Currently, the US is just one of many countries that is failing to control the resurgence of COVID-19 infections. A common theme here is that many regions try to contain COVID-19 with a minimal set of measures, for example limited restaurant hours instead of full closures. Against many measures, an often-heard argument is that "X is not driving the pandemic". Various regions have used this argument to leave schools and colleges open, have restaurants operating with minimal or no restrictions, and so on.

Taken literally, the arguments are correct insofar as that each individual "infection place" like schools or restaurants is not causing the majority of new infections. But even measures that eliminate just a small percentage of new infections can make a huge difference, and a few in combination can make the difference between a controlled epidemic with dropping infection numbers, and a rapidly growing, out-of-control epidemic. Therefore relaxing a few of such "minor impact" measures may well end up "driving" the epidemic from a "dropping" phase into a "rapid growth" phase. This problem is only made worse by halfhearted interventions, which drop R only just below 1.0. This means that case numbers will drop only very slowly, and rapid growth resumes quickly again after any relaxation.

Over the past six months, I have read several hundred scientific publications about COVID-19. Of all these, one of the publications that stuck to my mind the most was published by scientists from New Zealand. Apparently, it formed the basis of New Zealand's successful complete elimination of COVID-19 cases in the country. It listed a large number of interventions which were used in groups, depending on the current level of infections:

We can only hope that a similar rational approach will be used to control COVID-19 in the US and Europe over the next several months, until vaccines become widely available. Otherwise, we will see hundreds of thousands of additional avoidable COVID-19 deaths.